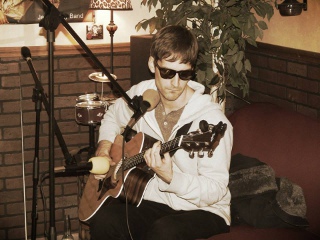 I've been at this for almost nine years.  I take or have been awarded partial credit for encouraging and/or helping to unleash a few cool things on the scene during this time.  Coy Koi, Swig, Black Market Binary, Megan Hopkins ... probably even more that never got legs ... and I will admit quite a few things have become inexplicably popular despite my initial read.  But, dammit, you have to give me Eric Pedigo, this skinny little kid that showed up at an open mic one night with a batch of really cool-assed songs and solid voice to back them up.  For some reason he had this ambition to play Birdy's ... which is ONE thing I can usually do for an artist ... so I had him play in the background while bands were signing up for the Battle back in 2013.  Next thing I know, our buddy Cannon has convinced him to sign up for the battle, and a few weeks later, he becomes one of the first singer/songwriters to advance to the second round, despite having brought only having two fans in the audience at the beginning of the night.

Since that time, Eric has become a staple of the singer/songwriter scene around town, playing several shows for Shine, collaborating with Steve Boller (Godfather of the Castleton music scene) on one of the better releases of the past year (thank you, again, Shine Studios), releasing what Ryan Brewer begrudgingly says is one of the best songs written by a local artist, and reaching the finals of Birdy's One Guitar/One Voice competition.  This is an impressive resume for his first 18 months in town, I would say.  This episode marks Eric's second appearance on Indy In-Tune and includes all-new live performances that he probably only vaguely remembers playing the first time.