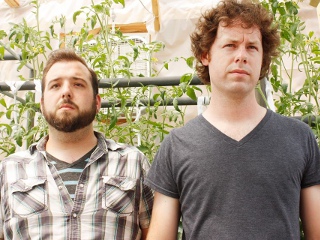 I'm constantly baffled by a nubmer of things.  How could anybody think Sam Smith intentionally lifted one of the most-overplayed Tom Petty songs, but so far not one person has called out Rihanna, who has made at least ten times as much money plajurizing Twinkle Twinkle Little Star?  Why isn't Chad Valley more popular in the States than he is?  And, how in the hell do two guys make as much noise as Brother O' Brother without Phil Spector or Terry Brown fiddling with studio trickery?  Seriously, I introduced these guys at the "Tequila Party for Robots" last week, and I even had to ask, "Seriously, where's the rest of the band."  When they were playing I went back to the soundboard to see if Jamie Jackson was hiding a surreptitious backing track or something under the console.  Nope.  Just two guys.  Honestly, if they came to me asking me to manage them, I'd tell them to come back when they at least had a bass player, or Ray Manzarek.  Who has ever heard of a "power duo" playing live?

What Brother O' Brother lacks in warm bodies, they more than make up for in body heat, possibly a fortunate side effect of all that extra room on stage.  I mean, seriously, we're talking leaps, kicks, drummers standing on stuff, lasers, pyro, inflatable sheep ... well, okay, maybe my memory is faulty, the sheep might have belonged to one of the Shine guys.  Either way, they gave a great interview (read: I barely got a word in edgewise and hardly had to edit anything out) and treated us to a few previously-unheard tracks from their upcoming release that are sure to make your jaw drop.