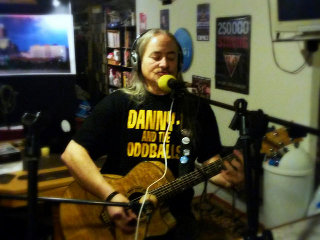 Our busiest year ever, and countdown to 250 by the end of the year continues.  This is somewhat relevant now, as I just scheduled podcast #199 for early next month and relaized I have made no plans for an episode #200 yet.  I understand the popular trend is to just ignore episodes ending in double zeros, but geez, it's been four years since Episode #100, and most of the people who were on that show have been conspicuously absent from Indy In-Tune for the subsequent 100 episodes. (Not my doing, I assure you.) Also, go figure that, despite the fact that this is (supposedly) a weekly show, I'm only on episode 200 after nine years.  Please don't do the math.  Meanwhile, upstarts like Chris Brake and the Free Beer Express have managed to polish of a quick century of episodes in seemingly record time, so I really need to assert myself as the "old school" of podcasters in this town.  Basically, I'm ready for a party.  So, I'm thinking at the very least we take over Studio C or the Sabbatical deck for an afternoon and have a half-dozen or so really cool people drop by and play some tunes, right?  On second thought I'm gonna need a beer sponsor for this, aren't I?

This week's guest, Richard Caudle, is a character.  A fantastic singer/songwriter known throughout the midwest, he is in possession of a very distinctive voice and an even more distinctive moustache.  I've seen a lot of weird stuff in 200 episodes, you know.  We've had nudity, surrealism, hilarious word combinations, beer through the noise, spontaneous music, earth-shaking revelations, just about everything, really.  This,  however, was probably the first time I've had a guest meow and puke on the same episode -- and the guy was so incredibly professional otherwise.  He even brought a manager/agent who tried to keep him on script the whole time.  Important tip for you: never let us catch you doing this; we see it as a challenge to drag you off script and into the weeds at every opportunity.