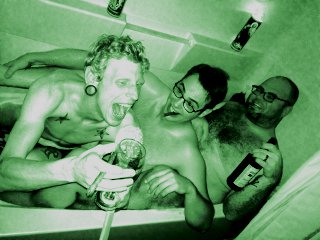 There are always those interviews that seem really dry at the time, but after you get the bed music dropped in, cut out the "ummms" and "ahhhhhs" in editing, and tighten up the pensive pauses, end up sounding like an attention deficit disorder group therapy session.  I really think this is the one defining characteristic that sets Indy In-Tune apart from ... ummmmmm ... say ... NPR's "Song Travels" (excellent show, by the way, TOTALLY unlike like this one). It should probably be a tagline. "Indy In-Tune: We're Not Afraid to Talk About the Stupid Stuff." Look at it this way, if you go to see Indien at a show, at least you'll have something to strike up a conversation about, right?  All I can say in my defense is that you should have heard this interview before I trimmed 20 minutes of nonsequitor comments.

Much like this interview, Indien's music is frantic, high-energy, and above all fun.  The songs probably can not be simplified with a single monaker like "punk," but like most good bands in that genre (particularly the Indiana variety), possesse elements of other, often complimentary styles -- in this case rockabilly and even country.  While songs like 1, 2, 3, Floor may be thrown together in a matter of minutes, one could easily spend hours analyzing some of the choices that are made off-the-cuff and what their overall impact on the distinctness of the music might be.  On the other hand, you could also just crack open a beer and enjoy it.