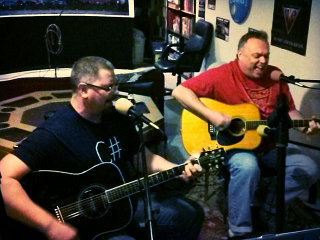 Who doesn't like a good in-joke now and again?  Certainly I'm guilty of it, possibly to an extent that it's make Indy In-Tune a bit more exclusive than it has any right to be.  On the other hand, it creates a heightened level of comradery between those who are "in" (or want to be "in") on the joke.  ("Seriously, why are you guys all wearing matching track suits?")  It's not like our humor and references are so esoteric you need a wiki in order to explain them (a la Frank Zappa), I'm just saying that if you miss a Saturday or one of our live events, you're probably going to have some catching up to do.  Or, you could just roll your eyes and listen to the music like so many people who have come and gone from my life over the past nine years.  It seems to me that as long as you have great music to fall back on, you've got a little leeway to be just a bit cerebral and self-indulgent.  This is Internet radio, after all, not Bob and Tom.

This week's guest, code(monkey); is a brilliant example of this mastery of both the properly-used in-joke and of making people who write blog posts grab their style guides to figure out whether the closing parenthetical comma is necessary if the name of the band contains parenthesis and has a semi-colon at the end. (The jury seems to be out, by the way, especially if it's used in a run-on sentence.)  Whether or not you get all of their marketing material or the humor on their web page (which is really what cemented my love for these guys -- well that and they named themselves after my third favorite Jonathan Coulton song), you really can't argue with good music, and the fact is that they are talented singer/songwriters who have developed a hrefreshingly unique (if somewhat off-kilter) sound that blends the lyrical depth of folk, the accessibility of rock, and the disenfranchised, emotional punch of metal.  While you might be tempted to assume, without listening, that the music is of the same cerebral humor as the image, give this episode a listen, I think you'll agree these guys are pretty serious about their craft.