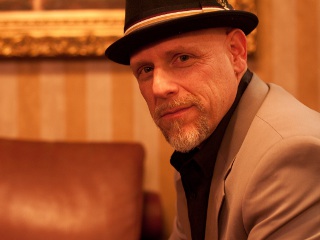 We're coming up on the ninth anniversary of Indy In-Tune.  I will admit, when I started this project, I probably didn't know a fourth of what I thought I knew about the local music scene.  Over the years, I think I've picked up a bit of knowledge, seen a few bands, and made friends with a few people.  Of course then I get in a conversation with someone like Jeff Sample or Dave Brown and I feel like I'm right back there where I started.  Granted I live to hear new music and meet new musicians for the very first time, but glancing at the upcoming schedule -- much of it courtesy of Ms. Leslie Lynnton-Fuller and her deep connections in the Jazz, Blues, and Soul scene here in town -- and I'm once again awe-struck at just how much music is out there that I haven't even scratched the surface of after all these years.

This week, for example, we meet Mr. Tad Robinson. Now, of course we've all heard the name and the music, but wow, now he's actually ... like ... here ... in Studio B!  Tad is a New Yorker by birth, but we give him a pass because he's a graduate of the IU school of music.  Over a career that spans four decades now, he's lent his talents to the likes of such regional and national acts as the Hesitation Blues Band, Big Shoulders, Dave Specter and the Bluebirds, and others.  Beyond that, his solo career, has earned him a string of soul and blues-related awards including multiple Album of the Year and Artist of the Year nods ... and still he finds time to hang out in Studio B, talk shop, and play lightning round with the likes of us.  Trust me, you owe it to yourself to listen to this music and hear the stories from the man himself.