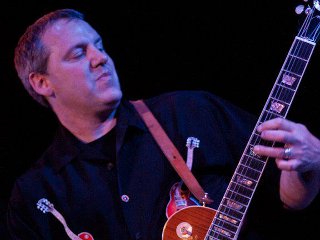 The local music scene is one of those ever-evolving things, I suppose.  Let's face it, I was pretty upset when I found out Jon Knight (this week's guest) was leaving Whoa!Tiger.  Of course, I was also upset when Mad Noonan left Del Zell, Yev Baburin left Tonos Triad, and Matt Hesser left Indianapolis.  Okay, I accept that I can't keep things the way they are, and it's probably not the healthiest thing for the local music scene if I did.  Noonan and Yev have gone on to create some really cool music, free of the constraints of the band environment.  And Hesser? Well, he's probably getting a much better tan than he would have gotten up here ... mostly owing to the fact that the giant hole in the ozone layer is located directly over his Florida home.

Oh yeah, but I was talking about Jon Knight.  Certainly Jon left his influence on Whoa!Tiger during his tenure.  One need only listen to their music both with and without him to pick out what were most-likely his contributions to that band's overall sound.  Or can you?  Certainly the material he has been producing since his departure bears about as much resemblance to Whoa!Tiger music as ... er ... ummm ... as something that doesn't resemble Whoa!Tiger music at all ... (he also does a much better Dennis Miller pastiche than me).   The point being, sometimes baby bird has to get out of the nest and spread his wings and maybe try out a few of those influences -- take the kinds of risks that you can't take when you've got band mates relying on you to stay a certain course and not make too many waves.  It's not a bad thing really, and in Jon's case, it's yielded some interesting results that really haven't been heard around this scene before.  Personally, I'm looking forward to seeing where it all leads.