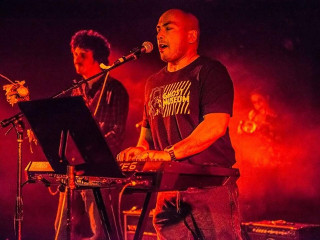 Just to clarify this somewhat oddly-flowing podcast episode, it was originally broadcast live on Indy In-Tune Radio one Saturday afternoon as a "Jeff DeHerdt Listening Party" where we played his new release, Ghost Museum, in its entirety over the course of an entire afternoon. Sadly, about fifteen minutes in, my trusty 15-year-old laptop decided to reboot itself (it has never done this before, or since), causing us to lose the actual introduction to Jeff and his album, and making it really difficult to piece a new one out of the various conversations we had over the rest of the afternoon. (Jeff and I are notorious for just geeking out on off-topic conversations, usually involving comic books, scifi or obscure old bands.) Therefore, it's going to feel like you got dropped in the middle of a conversation, which technically you did. In fact, you're also hearing what was literally a four and a half-hour rambling conversation that I've somehow paired down to one hour. It was worth it though.

Jeff DeHert is a long-time friend of the show, one of my favorite musicians to go see, and obviously one of my favorite people to sit and talk to for hours on end about every topic under the sun. With Ghost Museum, he continues his musical evolution that started almost 15 years ago with the largely jazz-related Club Bordeau, through the popjazz AOR of Autumn House, and into still another very different realm, this time drawing on sounds and stylings of late new wave influenced pop, but adding a more refined modern sophistication to it that makes it less of a tribute or mashup and more of a love letter.