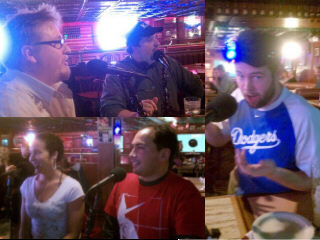 Special treat for those of you who who are show loyalists, and not just one of those iTunes people who subscribes and forgets to check the web site or Facebook page every once in a while.  Just for hard core fans, those of you who ever wondered why it takes me so long to put out episodes after they are recorded, or the one or two of you who listened to the "Official Version" of Show #100 and really wanted to hear more.  Here then is what I would normally consider the "first pass edit" of a show.  The audio has been normalized so the loud stuff and the quiet stuff are approximately the same volume, but there has been no EQ work done to soften the tones; no editing or trimming (aside from bathroom breaks) to take out ummmms, ahhhs, sutters, and bodily noises; and audio tracks are simply dropped to gauge final running time.  After adding four extra bonus musical tracks (you need something to entice you into downloading this after all), it clocks in at about two hours, which under any normal circumstances, I would then have to edit down to under an hour ... hopefully in one pass, otherwise I have to listen to it again to cut more material.

Word of warning: if you're bothered by rough audio, five people talking at the same time, stream-of-conscious rambling, intense musical geeking (especially about the Beatles), or long-winded, self-serving rants, then this special presentation probably isn't for you.  As it is, consider less a show and more of a fly-on-the-wall representation of what it's really like when my friends and I get together, drink a few beers, and geek out over music on a cold January afternoon.

There is an ongoing in-joke between us that comes from an outtake from Show #093 when Pres Maxson explained, at length, that his favorite Tim Spainhower song was "The Boys from Oklahoma Roll Their Joins All Wrong"  Fact is, that was a song by Cross Canadian Ragweed that he was covering.