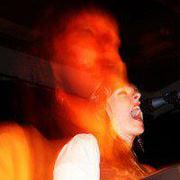 THE SHAKE UPS are an indie rock and power-pop band based in Indianapolis, Indiana. They fuse co-ed vocals, catchy melodies and bristling energy into a sound that combines the eclecticism of the Beatles and XTC with the everyman vibe of the Pixies and Matthew Sweet. Regular comparisons in the current indie music echelon include the New Pornographers, the Shins, and the Apples In Stereo. THE SHAKE UPS formed in early 2005 in Indianapolis. Known for his guitar work with locally-revered space-punks Destination: Earth! and internationally-renown surf-rockers The Madeira, Patrick was the band's primary vocalist, guitarist and songwriter. He was eventually joined by keyboardist/vocalist Bitsy Matatall (Bristis) and drummer Steve Hinckley (Hipster Zero, the Future Lovers). The band took its name from the popular Midwestern beverage consisting of water, lemons and mass amounts of sugar, and soon became fixtures in their regional music scene. They garnered strong reviews for their live shows, and were finalists in a Myspace-affiliated battle of the bands. They released their debut full-length album, A Twist Of Lemon, with indie imprints Gelatinous Productions and QuasiDad Recording Company in the Summer of 2006. The disc was also distributed by online music retailers such as Amazon, ITunes, CD Baby, and EMusic.

THE SHAKE UPS have split their time between the midwest and west coast, releasing three independent discs alongside projects from Blindspot Records and Not Lame Recordings. 2008‘s acclaimed full-length follow-up, Breathing The Flood, and 2009 EP, Last Everlasting, helped to expand both their sound and following. They were a featured "Band of the Month" at SanDiegoPunk.com, performed on the renown San Diego Living television morning show, and completed a concept music video for their song "Can't Stop the Signal." THE SHAKE UPS have also performed at several large-scale events, including the International Pop Overthrow Festival and Temecula Valley Summer Music Festival. They were finalists in the Old Town Battle of the Bands, performed two consecutive years at the San Diego County Fair, and delivered a scorching set at the legendary House of Blues.

The band's latest release, Warm Fuzzies, is a 12-track collection of "lost" California sessions. The album was tracked at Mystery Riff Studios, and is dedicated to the band's friends and fans in Southern California. Unlike previous SHAKE UPS releases, Warm Fuzzies was made in brief bursts of creativity between other projects, and stays an elusive course by splitting the difference between pristine power-pop and off-the-cuff guitar rock. Each song started as a simple acoustic number, and was built upon with layers of guitars, drums and vocals to shape its final version. The music is typically eclectic, with a range that includes rootsy alternative rock ("Cut Me Down"), 60's pop ("Prom Night Disaster"), reverb-drenched surf-folk ("Behind the Curtain") and edgy guitar jams ("Deathwish").

THE SHAKE UPS are poised to take the next step toward a larger audience for their music. Warm Fuzzies is another notch in the belt of a band that has come to be known as a primary force in the independent music community. As stated in Reviewer Magazine, THE SHAKE UPS "take their inspirations and throw 'em all in a blender. The result is something new, something fresh and something all their own."