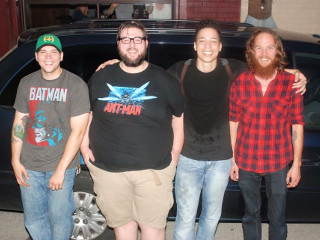 From among the ten thousand residents of a "we gotta get out of this" town, Ricky, Austin, and Chris became reluctant friends during their early teen years. Sharing a reverence for long hair and loud instruments, eventually produced a few chaotic songs between them and then stopped playing music together. None of them remembers why.

Eight years later they started playing again, and once again, none of them knows why.

Soon after they regrouped, they were joined by Alec from Greenwood IN, and thus; Autumn Androids were built and ready for action.

Our members are as follows:

Ricky Joe White: Passionate about music from an early age and having been given plenty of songwriting material by life's many curve balls, he has a true knack for making the mundane mesmerizing. He writes with the emotion only the deepest wounds can bring on and bears himself jubilantly in the face of even the worst circumstances. He is an inspiration to all who know him. He plays guitar, preferring acoustic for its dynamic advantages over the electric, and sings powerfully.
Gifted a bass guitar soon after the untimely death of his mother, Rick fondly recalls Blink 182 as an emotional escape from his then tumultuous home life. Learning their catalog aggressively blew the ember of his musical interest into flame. A friend of the family later introduced him to The Beatles which became a musical cornerstone for him, by which to compare all others. His favorite is Paul, the well preserved one. Around this time, he noticed the Muse record Absolution on a shelf somewhere and heavily identified with the review that called their work “life-shattering”. It then became his goal to shatter lives wherever he sang.
He naturally took to songwriting and wrote his first about his mother, the lyrics of which could be heard on the lips of most everyone in our crowd. He outlined a goal to me once that he strives to write lyrics that will be received on par with a punch on the face. I believe this effect can be felt by those who listen closely enough.

Austin Wooten: Growing up around music and largely friendless gave Austin time and opportunity to listen to a lot of bands and try to copy their guitar players.
He was brought up with the typical British invaders like The Beatles, Electric Light Orchestra and Led Zeppelin. Beyond that Austin has always been drawn to Depression-era Blues. You know, the kind that makes you feel like shit for having cell phones and hundred dollar pants? Later, he took to Beck Hansen and Punk followed suit. When Ricky played him the song “Movin’ On” (from the boy's previous band Good News/Bad Wolf) one night in a horse barn while laid up with a broken knee and broken heart, he felt the same emotional conviction from him as from Autsins other favorites. That's when Austin knew it was meant to be.

Christopher Woods: An absolute natural composer, he simply gets music. Like, in the same way some people just have a higher midi-chlorien count and can go on to become great Jedi knights. Chris plays the drums and writes his own music for purposes he won't disclose to the rest of the guys. Very mysterious. He possesses both an unrivaled understanding of his instrument as well as incredible depth of thought.

Alec Ward: Being the newest member of the group means that he doesn't catch most of the inside jokes the others make, but he tries to keep up just fine. Alec started playing music when his late Uncle passed down an acoustic guitar to him that only had 4 remaining strings. He practiced on those last 4 strings until they, too, broke, but Alec sparked a passion within him to play music.
He dabbled in 6-stringed guitars, as most guitarists are used to, but always found his hearth to be on the bass, as that's what he was always meant to play. Alec joined the rest of the guys in 2016, where they created the band which you see before you.

We are Autumn Androids. Prepare to be assimilated.

Back by popular demand for a limited time only, "I support local music ... and yes, that does make me better than you." Show the world that you, too, are a proud elitist music snob! Get yours before time runs out...
© 2006 - 2022 | Site design and coding by Darrin Snider | Content by Indy In-Tune and the Credited Artists and Writers | Layout by HTML5 UP