The 10th Anniversary Party and Roast of Darrin Snider 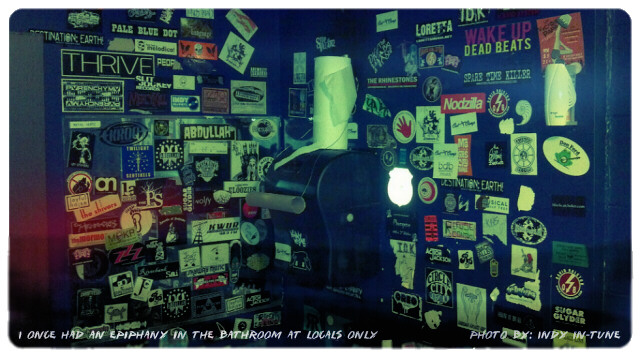 Did you ever get hypnotized by a sitcker-bomb on the walls of a disgusting bathroom and suddenly have a clear and concise plan for how you wanted to spend all of your free time for the foreseeable future? I did ... once ... though I honestly didn't think it would go ten years.

Happy birthday to the little side project that has given me so much joy, frustration, insanity, and clarity over the years ...who always by my side when I needed it ... and who introduced me to pretty much every one of my best friends.

To commemorate the milestone, we celebrated at Birdy's Live ... (Indy In-Tune 10 Year Anniversary And The Roast Of Darrin Snider) with performances by Chris Burch, Jeff DeHerdt Group, The Upright Willies, and Whoa!Tiger.  In the middle of the night, a roast of Darrin Snider was held, featuring appearances from RFI/DoIt Indy's MP Cavalier, Moss Steiger's Rooftop Antics host Diesel Reeves, and local musicians Kolo Bell, Jared Hiner, Jeff Byrd, and Jamie Jackson.  All of thus under the watchful guise of our master of ceremonies, Pres Maxson

Thank you most of all to the 300+ artists and what is easily over 1000 people who have graced my podcasts, live broadcasts, radiothons, acoustic showcases, and podconcerts over the last decade. In my mind at least, it's really more about you guys right now. Without this great local music scene and fantastic bunch of personalities who joined in, I'd be just one lonely little freak talking to himself into a microphone.