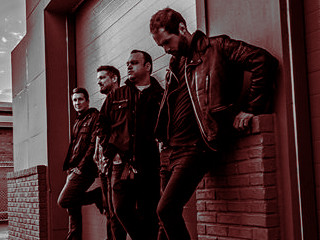 I don't think I've been this surprised or excited by a release in quite a while.  Honestly, I was out of the loop.  Had no idea this was coming, or I would have warned you guys ahead of time.  Frankly, it was last Friday morning when I saw bassist David Barajas' post on MFT that had a new band with a new release out that morning.  Once I saw the lineup -- Barajas (Extra Blue Kind, State, Stealing Volume), P. David Hazel (Extra Blue Kind, Beta male), TJ Briggs (Beta Male), and Matt Beaumont (Coolidge) -- it was a no-brainer.  I purchased and was listening to it five minutes later.  Within two hours, I had already secured the band for a podcast the next day. Now, a mere three days after it's release, I bring you, gentle snowflakes, fresh new music from a fresh new band.  What does it sound like?  Pretty much EXACTLY like you would expect, assuming you are familiar with the repertoire of those four veterans.  (Which you should be if you pay attention to anything I've been saying over the years.)  I was not disappointed, hopefully you will not be either.

PS - Yes, I know I say Show 222 in the episode.  The two were swapped in release order so that we could promote the April 30 show.