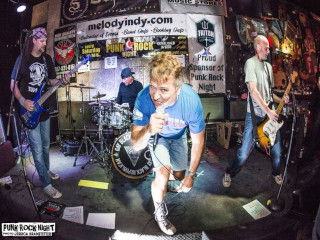 History lesson for you:  "Punk Rock" was not invented by the British in the mid 1970's.  I know, it surprised me too.  The term was apparently coined by music critics (those guys) back in the 1960 to refer to the aggressive, low-fi music coming from Detroit, Chicaco, and New York that was a direct sonic counter-point to the radio-friendly, squeaky clean, "hippie dippy" music (Fifth Dimension, Turtles, Sonny and Cher, BJ Thomas, et al) popular at the time.  As with American blues, it was adopted and refined by "post-Mod" Londoners (some would say directed by Malcom McLaren) who gave it much of the subsequent imagery, fashion, and culture surrounding it.  Since then, as with any good genre, it has been reclaimed, lost, split into a dozen sub-genres, buried deep in the earth for years at a time, dug up, recycled, made mainstream, driven back underground, and so forth.

This week's guests, Gay Black Republican, while certainly not one of the original punk bands of Indy, are long-time veterans of the Indianapolis music scene and could be argued are the current reigning kings of that scene.  Through six full-length albums and about as many EP's, bootlegs, and live recorded sets, the band has evolved from the garage band ethos to a more refined, intelligent-but-irreverent powerhouse of energy and musicianship.  Next month marks the 20th anniversary of the founding of the band, and as we learn in this interview, they show no signs of letting up or slowing down.