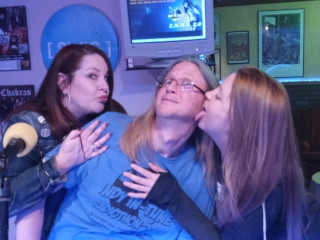 The third in this cycle of four shows sees the long-awaited return of Gregg Jones to the fold in what ended up being about three hours of talking that I managed to edit down to two one-hour coherent interviews about two separate projects. This first is Gregg's "Mad Scientist's Club." As I state in the interview, Gregg is in my top three favorite local guitar players as someone who is not only extremely versatile, but also plays very smartly in every track he plays on, being equally comfortable as an up-front soloist, or sitting back doing rhythm on a less-guitar-focused track. In addition, as this album shows, he's creatively capable of injecting a chord or style that can complement the song and take it in an entirely new direction.

Also present for this interview were long time friend of the show Kolo Bell, a recent addition to the cast of crazies Stephanie Michell (aka Vinyl Vanna, aka Lucy Latex -- because we couldn't remember which one she was), and Mia Kileen, host of the Thursday Night Rock Show on the radio stream and co-incidentally is also Gregg's wife and frequent musical collaborator. We would like to point out the mostly-admirable job Mia did of sitting in the background and letting Gregg do all the talking. Don't worry, we promised to let her off the chain in next week's show where we discuss Vestiges of Ecstasy.