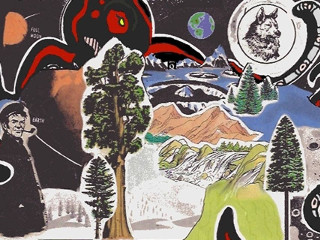 Upon receiving the request to review Yukon Fox's album, Release the Kraken, I was pretty stoked. I'm a big fan of nautical allusions in music, so I had high hopes. Plus, the group's name is very appealing to someone of my lineage (see: my last name [hint: it's Fox]). I tuned into the album with more enthusiasm than I perhaps normally exhibit when looking into new music.

Their aesthetic is super cool- the album art looks like something they plucked right out of art school (and maybe that's what they did). Their website is minimalistic- maybe by choice, maybe forced by money. Regardless, I dig the vibe.

The instrumentals by themselves are not at all dissimilar to older Cage the Elephant tracks. They sound primarily rock and roll with a little twang to keep things interesting. If given enough radio play and vocals that are easier to understand, they would easily become those songs that everyone has heard and can sing along to, but no one can actually tell you what album they came from. Instrumentally, the album is simple in a way that makes it golden.

The vocals, on the other hand, are almost bizarrely unique. There's no question as to whether or not they smack you right in the face, and if that's your thing, you'll totally dig YF's sound as a whole (personally, I'm more used to easy listening, so I had to adjust a little). The album features both male and female vocals, often at the same time. They're well harmonized; sometimes one functions as an eerie echo for the other. They're intense, and when paired with a stronger tune, the track can be overwhelming upon the first listening. The album consists of duets without sounding like the worn-out duets of karaoke bars and talent shows. Both Grant and Caryn have beautiful voices, and they're coupled wonderfully with the tone of the instrumentals.

For me, personally, each song is either hit or miss. I'm easily overwhelmed as a listener, so the stronger songs like Hide my Way and All in the Family freaked me out a little because there is just SO MUCH going on. The album as a whole, however, demonstrates a huge range of possibilities for the group. Each style and tone they try out totally works out for them. In terms of cohesiveness, Release the Kraken leaves a bit to be desired, but if they're cool with staying local, what they're doing is excellent (a distinctive, consistent style is more marketable, etc. etc). I imagine these guys would put on a really interesting live show, and not in a, this casserole is interesting' way, but in an ever-changing, diverse kind of way. The hodge-podge of moods demonstrates their ability; if allowed to work further, I think they could really focus on a specific style and hit it home rather than just trying everything. If you look at each song as a work of art, rather than the album as a listening experience, you'll be much more satisfied. The contrast between, say, Hide my Way and I'm Still Here prove that these guys can literally do whatever the hell they want and pull it off.

Bottom line: if you're looking for something new and totally different, these guys are going to be your bread and butter. If the local scene was art school, Yukon Fox would be the weird kids screwing around with crap they found in the dumpster, unrecognized until they won all the awards because their experimenting actually made something beautiful. I hate country music with unrivaled passion and even find rockabilly a little questionable, but these guys embrace their folk style and make it into an art, rather than being cheesy or obnoxious. Release the Kraken proves YF's raw talent, and I personally believe they could commercialize their work if they were to stick to a specific style. If that's not where they want to go, they're doing great work where they are now.

Personally, I'm not all that familiar in the world of rockabilly, but I'd say Release the Kraken totally fits that bill. Unable to provide a specific, Like this? Try this, I leave you with a: Just try this.

Release the Kraken is currently available as a free download on Yukon Fox's Web Site.  Go get it now!