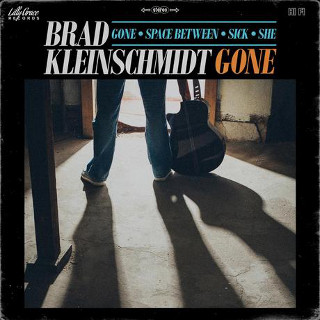 Despite the double-take I did when looking at Brad Kleinschmidt's name, I had no idea what to expect when I started in on his newest CD, Gone. Brad calls Muncie his hometown, really likes flannels (me too, Brad, me too), and isn't the biggest fan of social media, from what I gather from his Facebook page. His website boasts outstanding reviews and features tracks from his previous album, Head Trash. I sampled a few of those songs, and I can tell he's trying to go in a more rock-direction, which I, personally, am a big fan of.

While that first album leaned more towards a safe, modern-country sound, his new sound is best described as country-tinged rock. Rock with hints of folk is very common, but Brad's style is founded in straight-up country with alternative influences. His growth as an artist is clear in his new pieces. It's clear that these four songs were written after reflection of his first album, as he realized, it's time to try something different (he's looking for the space between? No more puns, I promise). Some songs feature almost synth-y elements, some begin with hard rock intros, and some even throw in some old-school record scratches before a chorus.

Despite this experimenting, Brad's lyrics and the majority of the instrumentals stay true to his older sound. His lyrics are warm and depict small town-life (I can vouch for his accuracy, being from Nowheresville, IN), which compliment his acoustic sound. The fact that he writes his own music, while expected on the local scene, shouldn't be taken for granted. It may be easy to miss the significance of his lyrics, but when taken into consideration with the tone of the songs, they create powerful messages. I'll let you interpret what said messages are come July 24th.

I deeply respect what Brad has accomplished with his newest pieces. He's an artist who identifies his roots and then tries to shake things up with allusions to different styles, which is how new genres and styles are made. Even if I don't personally dig the more country vibes, I acknowledge and appreciate his effort to incorporate those weird, alternative elements into his sound. I also enjoy the fact that he is able to weave them in a way that doesn't make it sound forced. It's impossible for me to write this review without acknowledging that Kleinschmidt is, in fact, an artist. He's growing and changing within his art, and rather gracefully. Before I listened to his previous album, I would've assumed he had been doing country-alt-rock throughout his entire career. Kudos, Brad.

Bottom Line: He would be awesome live. Even listening through my headphones, I can tell Brad is passionate about what he creates. On stage, I imagine this zeal would allow him to create those deep connections with the audience that often make smaller shows into an entirely different experience than huge concerts. If you're looking for something a little more country, but you're getting bored with the same-ol'- same-ol', check Brad Kleinschmidt out; he brings a new alt flavor to the typical scene.

When/How to Listen: On a long car ride during those days when you can see summer ending, but you're not quite ready to acknowledge the disappearance of longer days and socially-acceptably mosquito bitten legs. Brad will bring you back to the days of heat-lightning and bonfires.