I Dream of Things That Never Were and Ask Why Not? 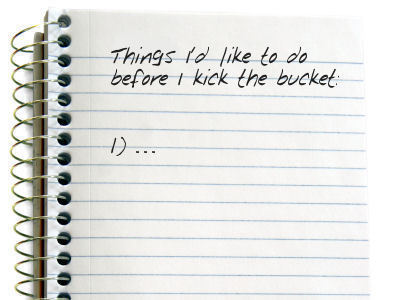 Many of you know, Indy In-Tune started as a music podcast seven years ago that was originally intended to be a business podcast for a web portal to be built by a software company that I used to be part owner of.  (Take a deep breath and reread that sentence if you got confused with the whole "wayback machine" intro.) Recently, I met up with my old business partner from those days, who was curious about what I was doing with the recent expansion of the website and my foray's into actually self-funding through commercial-driven streaming radio.  During the conversation, he posed the question:  "So, what is your end game?"

End game!?  Frankly I didn't know I needed one.  (He assured me I did.)  I think I had always assumed there one one day be 85-year-old Darrin sitting in a hoverchair in the nursing home, interviewing the grandchildren of the very artists I'm hanging out with today, though instead of going out to cell phones and computers, I'd probably be doing something cool like beaming my memories of the interview directly into everyone's brain.  Okay, I know this seems very unlikely, as many of you have no realistic prospects for procreation in the next few decades.  In lieu of the science fiction ending, therefore, I decided my end game would be to one day have a day of work consist of the following intense schedule:

Now, of course I know there would be other stuff involved.  I suppose I'd have to record new episodes of the podcast a couple of days a week, and I'd have to go see bands in the evenings.  Groupies would also be a problem -- they're so demanding of attention and all ... or ... so I've heard.  Still, I think this is the pinnacle of being a full-time, professional slacker, and after 20+ years of stressful corporate life making millionaires even richer, I'm all for giving this lifestyle it a whirl.

Since this is obviously unreasonable, I did however, make a short five-item "bucket list" of things that have always sort of been in the back of my mind to do.  Certainly some of them seem far fetched, but at one point having your own streaming radio station and booking a couple-dozen showcases per year under the Indy In-Tune brand also seemed a bit pipe dreamy, so I'm sure I'll get around to these eventually, and probably in this order.

1.  Indy In-Toon -- It isn't exactly a secret, but also isn't common knowledge that plans for a web comic series have been on-again/off-again for a couple of years now.  I've known uber-talented comic artist Mark C. Dooley for something like 20+ years, and he is responsible for all of the artwork you see around the site, as well as his own web comic series, "The Semi-True Adventures of Mark and Dee."  Recently, I hit him up for a change of style to coincide with the radio station launch.  He treated me to a gallery of characters in a completely different style from what we had been using on Indy In-Tune.  In the end, I decided to stick with what had worked for the previous six years, but thought the new characters were so distinct and cool-looking that we just couldn't let them go to waste.  I hit him up with the idea of doing a four-panel comic series using some of the characters.  I could write the scripts; he could draw them.  It would be the story of a bunch of local music fanatics starting a radio station in a suburban basement. I pitch it as "Bloom County meets WKRP in Cincinnati."  He immediately agreed, but thus far I have written about two weeks worth of strips, of which only two are good enough to be published, and I feel I need at least a two dozen strong ones out of the gate.  Someday soon I hope to get inspired and remind him of the Faustian bargain he made in the summer of 2012.

2.  The Encyclopedia of Indianapolis Music -- Technically, I consider myself to have been a fiction writer for years, dealing mostly with writing technical manuals for things that a) don't work work as described, or b) don't exist at all.  To that end, I've always had a burning desire do do long-form writing that people might actually read for a change, even though it doesn't pay as well as writing things that people just ignore and put in a drawer ... go figure.  This "coffee table book," as envisioned would cover the early pops and jazz orchestras of the turn of the 20th century to Indiana Avenue in the 1950's to our present day music culture -- along with everything in between of course.  The focus of the book would be the individual players and personalities of each era, their impact on subsequent generations, and in general, what it meant to be a musician living in each of those point in history.  I have a few premises to test out, but obviously, one can never do to much research on these things.

3.  "The Lamb Lies Down in Broad Ripple" -- A fictional novel (possibly independent film) set in the Indianapolis music scene.  Obviously as a frustrated writer, I've got scores of half-finished novels sitting around in various states, mostly because I rarely organize myself when writing.  I know that I really should have outlines and plots or at least a general plan when writing, but secretly, I just like typing about characters and seeing what they do -- it's no fun if I already know.  One of the few times I've actually plotted out a story from start to finish was an outline I wrote for a mystery/thriller novel set in a stylized/idealized version of the Indianapolis music scene.  This one I like to pitch as Alain Robbe-Grillet and Franz Kafka meet Purple Rain and Light of Day.  Thus far, only a few people have actually seen it or know the story, as most everyone else I know makes a cameo at some point.

4.  "Infinite Nun's Frothy Deed" -- The concept band and album.  I do still occasionally play keyboards -- usually as a session guy, but once or twice a decade in front of a live audience.  I wouldn't say I'm a "good" player by most definitions, but I'm competent, and actually do much better at composition than at actually playing.  Thanks to modern software, however, one does not need to actually be able to play what they compose, and I've got a few magnum opuses sitting around that could probably use a set of more seasoned ears, or fingers.  The album itself would be done in the sense of an early/mid 70's progressive rock concept album, but in a more accessible and varied style of something like Elton John's Goodbye Yellow Brick Road album, where each song is done in a completely different style.  The idea would be for me to offer up half-finished or two-thirds-finished songs to groups of musicians who have never played together before, but who in my opinion, ought to be working together.  I was actually ready to roll with this last summer, when Jack Barkley accidentally talked me into starting a streaming radio station instead.  I suppose there's always next year.

5.  Studio D -- I know it's destroying the mystique and ruining the secret, but guys, the "B" in "Studio B" ... stands for "basement" ... because that's what it is.  I know ... I know ... many of you are now shattered, picturing in your mind a ritzy, brass-and-glass lounge somewhere with 6-foot Amazon redheads dressed like magicians assistants catering to the every whim of musicians as they sit on velvet couches awaiting their turn in the booth to lay down pure art on 24-tracks of tape ... er hard drive.  Sadly, however, it's just an old bar-top I made out of a junked waterbed and an old couch that smells a little like cat pee.  "Studio C?"  That's just a code name for "Claude and Annie's" when they don't comp my bar tab for the endorsement.  Studio D, however ... stands for "Dream."  The picture in my mind, it's inspired by this image from my youth. (Okay, maybe not pink ... and in slightly better shape ... possibly on the canal in Broad Ripple somwhere?  You know what?  Never mind.  Forget I said anything.)  I see it as the home base for the radio station, a central location for recording podcast episodes, and a hangout for musicians of all ages and expertise.  (I'm thinking the snack bar will be even more legendary than the magic fridge in Studio B.)  In addition, it would also serve as the main hub for a gear swap shop and local music store, making it the ideal stop for both musicians and fans to come in and learn about their local scene.

So, there you have it, the official, Indy In-Tune bucket list.  Possibly a bit ambitious. Possibly a bit overstepping the bounds allowed to a part time internet radio host and full time local music evangelist with a decent day job.  Still, one has to have something to dream about during the magic time period between buying the lottery ticket and finding out you didn't win.  Think you can do better?  Leave it in the comments.