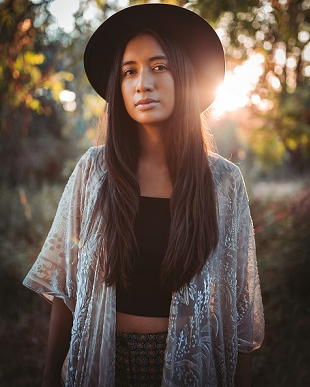 July 24th singer/songwriter and activist Raye Zaragoza will perform at The Murat Theater as part of her cross-country tour with Dispatch and Nahko and Medicine for the People.

“Raye has been deemed as a voice for young women from a multi-cultural background. Zaragoza’s past anthem ‘In the River’ has been awarded No.2 protest song by a person of color by Paste Magazine.”

According to her bio: Raye Zaragoza is an award-winning singer-songwriter who carries an acoustic guitar and a message. Her quiet yet powerful song “In the River,” written in response to the construction of the Dakota Access Pipeline near the Standing Rock Sioux (Lakota) reservation in North Dakota, resonated strongly with listeners and went viral in late 2016, garnering half a million views on the video, national media coverage, and a Global Music Award and Honesty Oscar.

Writing about social issues comes naturally to Raye. "As a woman of color in America, social issues are things you deal with and see every day of your life," she says. "I write about my experience and oftentimes my existence has been laced with injustice."

Raye performs her music all over the United States as well as across Europe, where she spent five weeks touring in summer 2017. Her music has been featured on Democracy Now! and numerous lists of the best modern-day protest songs, including those by Paste Magazine, What Culture, and Overblown.

At SXSW 2018, Raye spoke about her loyal fanbase and maintaining an independent career on a panel entitled "Serving the Sacred Bond" hosted by PledgeMusic. This summer, she joins Dispatch and Nahko and Medicine for the People on their Summer Tour, which, aside from Indianapolis, includes dates at Red Rocks and two nights at Central Park Summerstage.

Indy In-Tune and People’s Press Indy were fortunate and grateful for the opportunity to ask Raye some questions about her music, her tour, and her activism.

RZ:  I grew up in a studio apartment in New York City with my five person family. My Dad was on Broadway in Annie Get Your Gun as Chief Sitting Bull when I was a young kid - so I grew up around a lot of musical theater. He was also a trumpet player in a Mariachi group.

Who were your earliest influences? Who are some of your more current influences/favorite artists?

RZ: My earliest influences were definitely Jewel, Joni Mitchell, Elliott Smith, Harry Chapin, Bob Dylan, The Beatles, and James Taylor. I think my current influences are pretty much the same!

First album you can remember that made an impact on you?

RZ:  Definitely Jewel’s ‘Pieces of You.’ I remember getting it for Christmas when I was 5 or 6 and my life was changed. Also Avril Lavigne’s ‘Let Go’ was pretty much the soundtrack to middle school for me.

When did you begin performing, and has there been a really standout performance for you since you started touring?

RZ:  I started performing in school plays when i was 8, but before then I sang Annie Get Your Gun songs at family gatherings with my siblings all the time! I honestly couldn’t name one performance - every single show is so different and special in its own way.

Talk to me about recording your first album.  What was that like?

RZ:  Recording ‘Fight for You’ was such an incredible time. Also an amazing learning experience. Self-releasing & self-producing an album was a challenge but also the most rewarding creative project I’ve ever done.

Your music can be very positive and hopeful, and sends a message.  Where does that come from?

RZ:  It definitely comes from my upbringing and background. Growing up in the United States as a woman/girl of color with an immigrant mother and indigenous father definitely shaped the way I look at the world - made me see a lot of the injustice at a young age. I always felt a calling to contribute to the healing of what can often be a dark world. Music has always been my main way of healing, so if i can do that for someone that is a dream come true for me. 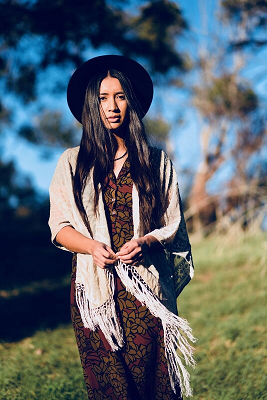 Your American Dream video is pretty profound and refreshing.  Can you tell me about the writing of that song, and also talk about the amazing video?

RZ:  Thank you! That song was a long time coming. I feel like it’s been in my heart my whole life - and I finally got to materialize it. The song is really about trying to make sense of all of the injustice happening around me, and deciding that taking action is the only way to be. The video was directed by George Thomas - a young aspiring filmmaker who sent me an email out of the blue with the concept. I fell in love with it immediately.

You have really beautiful videos.  There is one with a wonderful fancy dancer in it, “Fight for You.”  I love the images you were able to capture for your videos, and that song honestly gave me chills.  Do you have a favorite song or video of yours that holds a particularly special place in your heart?

RZ:  I am so glad you like that video! I think I’m a little biased having that video be my favorite since I self-directed & edited it. It really feels like my baby. The concept was very effortless for me, and I knew exactly what I wanted it to be from the start. So, that one definitely holds a special place in my heart.

Elaborate on the “Driving to Standing Rock” song.

RZ:  Driving to Standing Rock is meant to be a celebration of fighting for what you believe in. I wanted the song to access both the fear and excitement of driving to a “protest” or action. Being an activist is a lot of work, and I wanted the song to honor those who went to Standing Rock. The verses explore my own journey to standing rock and getting stuck in a blizzard.

American Dream mentions the boarding schools…. Was anyone in your family impacted by that horrible atrocity?

RZ:  I love Nahko & Medicine for the People’s Love Letters to God. My musical activist heroes are Bob Dylan and Joan Baez. My current activist hero is my friend Calina Lawrence. She is an incredible speaker and performer.

What keeps you hopeful?  It’s important to have art/music out there that isn’t all just doom and gloom; it gives us hope.  Where do you find that within yourself and how do you bring yourself to be able to share it with everyone?

RZ:  Music is definitely the way I keep hopeful and moving forward. Whenever I feel angry about something - I write a song about it. It helps me make sense of what I am going through. Sharing the songs also brings me peace because connecting to the audience reminds all of us that we're not alone.

What are you most looking forward to, or aspiring to do with your music next?

RZ:  I am looking forward to releasing a new album and continuing to tour with other artists who inspire me. I also want to continue to build a platform where I can inspire other young women to believe in themselves and their abilities as creative people and entrepreneurs!

Talk about your summer tour.  How do you feel about performing live?  Do you get nervous, and if so, how do you deal with that?

RZ:  The summer tour is a total dream. I am on the road with some of the coolest people I’ve ever met. Dispatch, Nahko and Medicine for the People and their crews are so sweet and welcoming. Performing live is honestly my favorite part of my life as an artist. I love connecting with a new audience and their specific energy every night. Before I go on stage, I definitely have butterflies but it’s definitely more excitement than nerves.

You’ve played shows in Europe as well as the U.S.  What was that like?  Any major differences between U.S. crowds and European crowds?

RZ:  I love playing in Europe! The crowds are always so wonderful there. Playing in Europe has really shown me how universal the language of music is. It’s hard to say exactly how the crowds are different but it’s definitely very special place to share music.

What advice would you give to those starting out that you wish someone would have said to you?

RZ:  My greatest advice to an aspiring artist is to work harder than everyone else around you. Be relentless. And never apologize for it.

Is this your first time visiting Indiana/Indianapolis?

Wow!  We are thrilled to have you!  What can our readers/listeners expect from a Raye Zaragoza live show? Or, as far as a show preview, what would you like for our readers to know about you or your music or performances?

RZ:  I definitely aim to leave my audiences with a sense of community and a feeling of healing. I hope to inspire, energize, and invigorate everyone watching. I usually always play solo!

I certainly share that desire with you, and it’s wonderful to know that you are out there doing what you do, and so beautifully, and inspiring others.

Thank you so much for taking the time to speak with us.  It’s been an honor and I really look forward to seeing you play in Indy on July 24th.

Check out Raye’s music via her website and social media, and we hope to see you at the Murat Theater July 24th for what is sure to be a beautiful, entertaining and inspirational show.