"The Instruction" to Play Melody Inn 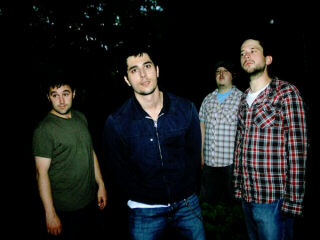 Louisville, Kentucky's "The Instruction" will be playing the Melody Inn this Saturday, August 27.

With often dark and introspective lyrics draped over eclectic guitar riffs, The Instruction (a foursome comprised of Blake Sakal, Wes Hawthorne, Jeremy Stein, and Brandon Terrell) has made its mark through relentless and energetic live shows, sharing the stage with everyone from These United States to Thao with the Get Down Stay Down, Mc Chris and The Features. The Instruction have had their songs songs "Stray" and "You're Mine" featured in the MTV series Sixteen And Pregnant as well as their "Into The Tomorrow" video played on Fuse On Demand Tv. With their SonaBLAST! Records debut, "Failure by Design", which is played frequently on Louisville's own 91.9 WFPK radio, the group is ready to move forward into the rest of the world.

Hailing from Louisville, KY, home to such enigmatic and diverse musical icons as Slint, Will Oldham, My Morning Jacket, Rachels and a wide array of 70s punk bands, it shouldn't be terribly surprising to find The Instruction's sound as something fresh in the face of an oversaturated indie rock market focused on gimmicks.  This is perhaps never more true than with songs like Mayday, Hello Darlin' & Into the Tomorrow, which display the kind of raw emotion that would be right at home in both the indie charts and commercial radio.  While you can sometimes feel vague nods to their influences, Failure by Design is at all times their own, dripping with eclectic guitar riffs, pinpoint transitions, pumping bass, and infectious choruses.  The Instruction is founded on Stein and Terrell's hermetic rhythm section with guitars that are abrasive in all the right ways, and at the very core of their sound is Sakal's vocals, which bring to mind the grit and masculine sexuality of Jim Morrison.  Tight production and years of playing together complete the package, and with a new release, a new record deal, a solid fan base and a series of music festivals on the bill, The Instruction is going to surprise and enrapture you. Listen, Learn, Love.

"Failure By Design" on sonaBLAST! Records- Available for Purchase 7/12/09.  Extensive radio play on WFPK 91.9 in Louisville and recieving radio play in national markets.