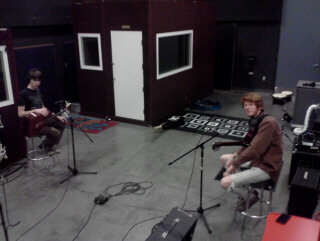 Coyote Armada caught my attention early in their search for musical excellence at Butler University, and because some distinguished gentlemen named, Mark Dirty Rock Alexander brought them to my attention. Curiosity was sparked after I heard the first track, "North" off the Kye Oats EP that was recently released. Even before its release, their driving stage presence and Led Zeppelin meets Nickel Creek-influenced sound had the local scene talking. It can be said that there are moments of Radiohead and Dispatch felt as well, but the vocal talent of Bob Barrick hits me as a young Robert Plant reincarnated more than anything. Stressing songwriting, instruments-over-computers, and down-home-good-times, the band is in a position to be taken seriously by fans and critics alike.

Coyote Armada was rightfully my first artist interview for their aggressive approach to the folk genre. As featured throughout their debut EP, the band captures the essence of folk rock with their lyrical and often poetic honesty in songwriting. They mix this with a brilliant rap by Nicholas on "Millstones", and even hook heavy qualities of southern and blues influenced rock on this five song adventure. This results in a blend that hits the ear in a way that listeners cant help but groove to, sing along with, and be a part of from beginning to end. They hold a passion for all things rock, blues, folk and I believe their music has tipped the hat to these genres in a noticeable way.

They have broken away from the boundaries that define their genre normally by producing material that holds a broader musical range. They have branched from a standard folk band and have developed a voice and sound that is uniquely their own mixing all of the aforementioned genres with notes of indie and pop. Their fresh approach to folk music is what will take the band to the heights that they want to achieve.

I was lucky enough to catch up with Bob on Butlers campus a few weeks back and honestly left the interview a bigger fan than when I arrived.

What do you think about when alone in your car?

I think about death a lot, Im terrified of it honestly

What are you currently listening to these days?

What is one thing you know now, that you wish you had known when you started this band?

That just because Im a front man, it doesnt mean I own the music

Whats been the most satisfying part of this project?

The experience and everything I have put into it thus far

What has been the least satisfying part of this project?

Mainly the PA systems we have to play through at certain venues, to be perfectly honest

What recent accomplishment are you proud of?

I would have to say the EP and my poetry class. I have discovered my voice and its continuously growing

In what type of environment do you work the best in?

In my room, low lights, and late at night. Its an out of body experience that happens when im little tired and possibly buzzed. That helps keep me from my own boundaries

Do you have someone who you consider to be a professional mentor?

Dr. Forham my poetry professor, he has led me to write in a way that is self forgetful

As we wrapped up our interview, Bob expressed the bands passion to connect with the audience when on stage and the rewarding moment when they see a fan singing their song back at them. Coyote Armada, on behalf the local Indy music scene, we want to thank you for the music, the passion and look forward to singing your songs back to you for years to come.