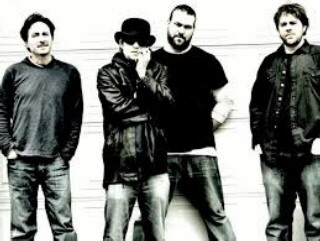 In an era where the Billboard chart is topped by names like Lady Gaga, Maroon 5 and Rihanna; Endiana bring back memories of the days when bands like Tom Petty, Guns N Roses, and even Blind Melon ruled the airwaves. These guys have been happy to carve out a nice little home in the earbuds and speakers of the late Generation X, and early Generation Y, who still appreciate a good old fashioned hook, and churning guitars. Though the bands latest efforts with their music still maintains the aura of  classic rock, it has fit in the lessons learned from recent indie rock successes into the mix. The mix is clean, but not polished, with a dash of dirt mixed in with the guitar and drums, and enough pop sensibilities to keep you tapping your toes.

For the band, life lost and found is viewed through a cinematic lens. Like scenes from a movie, songwriter Matthew Aaron shoots every line like a heartbroken reel. He crafts his words with a poets eye, and the scenes lit with the radiant light of his yearning, soaring voice. Take a second and think of this: An A-Ha style video, consisting of lots of crazy drawings, cartoon action, and a nice bold guitar riff on top. Images of lots of people in a crowded warehouse, jumping and diving as a band rocks it's way through another song. Yeah, these images sound a bit old school, but they are exactly what I think of when I listen to Endiana.

And that's not a bad thing.

Their music offers nothing less then radio-perfect, guitar-driven rock. They are reminiscent of Wilco and Bruce Springsteen meets Cold War Kids, but manage to keep an identity of their own by moving flawlessly through small nuances of the rock genre.  One of my favorite songs released Second Hand Heart, is a wonderfully written piece whose great lyrics (which emphasize small images as being the things remembered about a relationship thats troubled) are coupled with another awesome delivery of a very memorable melody.

I was lucky enough to be able to sit down with Matthew Aaron and Tim Fuller from the band and learn more recently.

Can you give me a rundown about Endiana and your history?

Most importantly we have been friends for about 20 years. We all came from different projects, myself (Matt Aaron) from Trainwreck, and Tim Fuller and Tim Gray from LMNO. We started the core of the band about 5 years ago and seem to rotate other members that we are lucky enough to have sit in with us. Currently, Doug Henthorn from Healing Sixes has been jamming with us and its been a great experience.

How did the band, Endiana, come about?

There are a lot of talented people still around Indiana that need to be discovered and we are hoping to be stewards of the scene. Sure, its about the music and connecting to an extent but from there we want to help set a standard and be a leader for other great musicians to learn and grow with over time

What album influenced you the most growing up?

Matt, how did your songwriting start for you early on?

Poetry through high school was the beginning for me, then a good friend of mine passed away and the band Trainwreck started in memory of him. We recorded and album to remember him by and the first song that I actually wrote, God Bless Rock N Roll was written for the album. Ive learned that my songs have to be written from something true and real to me, otherwise I would forget the words

What is one thing you wish you knew when you started this band that you know now?

What has been the most satisfying part of being in this band?

Over all this time we are still friends and that we love creating and building this together. The bigger shows and fan base expansion is really nice but it wouldnt means as much if the band wasnt as close as we are after all this time

What recent accomplishments are you most excited about?

Tim: I left my day job and Im able to focus on music full-time now

Matt: Im in a new movie coming out around December more than likely called, Serial Killer Culture. It will be available on Netflix and Im very proud to be apart of the project

Who inspires you or has been a mentor in your life that still has an impact on you today?

Tim: My mother has been the biggest supporter of mine and always personal which I admire

Matt: Ottis Gibbs. I always ask, What would Ottis do?, if that helps give an idea the impact he has had on my life. I shot photography for his band, Blind Ottis and the Lost Highway, on the last night the Patio was open. Scott Quinn, their band manager had asked me to do the shoot, and that was my buddy who passed away and I formed Trainwreck in remembrance. We were all very close friends and I have a lot of respect for Ottis still to this day

As for the new material, Endiana just keeps getting better.  Matthews voice absolutely shines on the new single and video Life of Leisure and with all of the talent this band has on every instrument, they dont need to muddy the waters with extra layers like many bands choose to do these days. Endiana is rock and roll the way it was meant to be played.