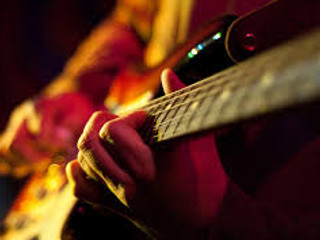 We're on a roll now, so I thought I might do a set of mixed tapes featuring a different instrument each week. Now, please don't take this as a "Top Ten" or "All-Time Greatest" list. There's a formula for contriving those for maximum efficiency. Seriously, I read this in a book by a rock journalist: They intentionally put something kind of current and established, but not too "out there" for #3, then swap #1 and #2 to make people talk about how the list "isn't wrong, but they would have done it differently." We're all friends here, and I would never manipulate any of you in such a shallow fashion. As you can tell, my lists are completely self-serving and really only about stuff I am listening to.

So, for this list, we're going to look at guitarists. As a keyboard player who never really got past basic chords, I know shit about what technically makes a guitar player good. I'm sure like everything, it's a matter of chops, style, technique, fundamentals, etc. Let's just say, basically I know what I like, so that's criteria #1. Criteria #2 is, I'm trying to avoid the ridiculously obvious ones that are ALWAYS in these lists. Please don't throw bricks through my window; I don't hate Hendrix, Stevie Ray, Van Halen, Iommi, and those guys, I just don't happen to be listening to them much this week compared to the people on this mixed tape. Also, I'm TRYING to avoid repeating bands that I've already mentioned multiple times in this column over the past three months, so that also weeds out another group of artists. Besides, I had to leave something for you guys to talk about in the comments.

Al DiMeola -- Kiss My Axe Aside from chops and obvious virtuosity, Al has this whole "cool high school science teacher" vibe going for him. Heck, he doesn't even make the "pain face" when he's shredding. He's just Mr. Ice.

Frank Zappa -- Zoot Allures Not being a guitar player, I don't know what he's doing that makes his sound so distinct. Is it the effects? Is it this weird "upward picking" or where he's playing on the neck? Either way, there's a reason the word "genius" is thrown around with his name a lot.

Ritchie Blackmore (Deep Purple) -- Speed King When you start thinking about the influence of Hendrix on the British players, you always hear the story of Clapton, Richards, Townsend, Harrison, et al going to see him and being blown away. I really feel like Blackmore was the only one who was really paying attention, or at least he was the only one that went on to blatantly follow on from where Hendrix left off.

Peter Frampton - Lines on My Face The thing I love about Frampton is, both his voice and his playing are versatile enough to go from shredder to ballad effortlessly. I also love that his voice and playing haven't changed one bit over the years. You can find a current version of the song out there, but I'm going with his "Virtuoso Musician on the Cover of Tiger Beat" era ... which is ANOTHER thing I love about Frampton.

Allman Brothers -- One Way Out I know, I said I was going to change up the bands I pick, but as mentioned before, I think Duane's death reshaped the direction of rock in the 70's, and probably not for the better.

Buddy Guy -- First Time I Met the Blues Saw Buddy Guy for free back in the 90's ... sort of a last-minute, "Hey, I've got tickets to this show, do you wanna go?!" I liked him before, but seeing him live, I fell in love.

Jeff Beck -- 'Case We've Ended as Lovers I'm going to double you up with some Yardbirds alum here, just because Clapton also killed it on this performance.

Adrian Belew -- The Momur I've seen Belew in concert probably more times than anyone except Yes. Difference is, you usually get to say, "Hi," and chat with Belew afterwards at no extra cost. The hardest part was picking which track to spotlight. Feeling classic tonight.

Michael Schenker (UFO) -- Rock Bottom Schenker is on another planet here. One of the great guitar tracks of all time.

Robin Trower -- Bridge of Sighs This could also be considered the 11th track on the "Wine Drinking" playlist from a couple of weeks ago. Another long-time favorite of mine.