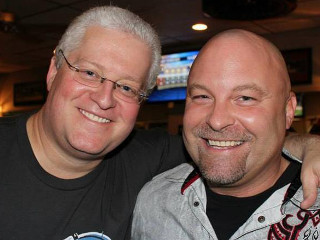 Recorded Show #154 tonight with the boys from the Brother Brother Beercast.  This marks my second foray recently into the world of free-form open-format podcasting.  Again, I have to say, I have nothing but admiration for guys like Chris Brake, Rob Branson, and Johnny Lyles who can pull that off week after week.  Personally, I just can't "force" myself to be funny or interesting at will like they can.  I have to start with my cheat sheet and a rough format.  I have no problem with throwing both out five minutes into the show if the conversation goes off on a crazy tangent, but it's like a touch-point ... or maybe a starting block in that when I don't have it handy, I always feel the runner came out of the starting gate a little bit sideways.  Still, I think we can make something of it in the edit.  There were a couple of good stories and a few yucks in there.

Big weekend for music coming up, and I'm always excited about those you know.  Thursday night, Audiodacity plays Shine on the Rocks at the 86th Street Pub.  Not sure what they have in store, but generally speaking, those shows are stripped down acoustic-type numbers, so I bet it's going to be a slightly different format from what you're used to.  Frankly, I'm kind of excited to see what they come up with.

Friday night is a big show.  Square Social Circle, which is now something like a Venn diagram containing two-thirds of Swig will be playing Birdy's along with Coyote Armada, Dell Zell, and Trackless.  The former two are consistently excellent bands to see live, and Trackless, if you haven't yet had the pleasure (they don't play Indy all that often), is the band that, when Audiodacity heard them at the Battle of the Bands, at least one member was quoted as saying, "Suddenly I don't feel so certain we're going to win this thing..."  Trackless was a judge favorite, and did take second place that round without any sort of fan base at the show.  Would Audiodacity have been toppled if Trackless hadn't withdrawn from the battle?  Show up on Friday and judge for yourself.

Saturday night, there's only one party, and we've been waiting for it for months now.  Veseria releases Voyager, their second (really, third) album with a gala fete at the Irvington Theatre over in my old stomping grounds.  As you're getting ready for the show, be sure to tune into Indy In-Tune Radio, where starting around 6PM, we'll be simulcasting the VIP/Listening party live to you, just to get you in the mood.  We'll be spinning the album in its entirety, and the band will be on hand to give us a few insights into the new tracks.  There may be a few more surprises; even I don't know what's going to happen.

Sunday I'm thinking we're going to open up Studio B for another one of our Radiothons.  The magic fridge will be restocked by then, I've got a few very cool guests lined up, the usual suspects will be hanging out in the studio audience, and I'll even spring for a bag of Barbecue Ruffles to munch on.  If you know how to get to Studio B, drop on by and say "hello."  If you don't know where Studio B is, drop me a line for directions and I'll get you there.  All are welcome to come hang out, a snacky item or six-pack to share would be welcome, but certainly not required.  I'm thinking we'll get started around 11, and run 'til about 6, when it's time to head to Shine at the Castleton grill, eat a little dinner, and cap the weekend off listening to Blake Miller flex his songwriting muscles.

Regardless, remember that it's all about the scene, folks.  Whether you follow my suggestions for a fun-filled weekend or not, please get out at least once, see a local band, and tell them how much you appreciate what they do.