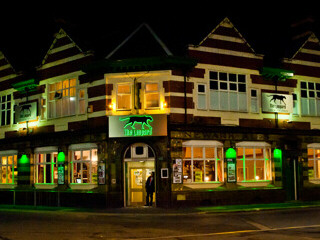 Obviously I'm an obsessive/compulsive personality, especially where music is concerned. Whenever I find a band I like, I tend to collect everything that band has done, then all of the solo albums and side projects of the band memebers, then start moving in to their peer bands and/or their label mates, then I'm rooting around in Chick Corea's garbage looking for discarded toothbrushes. Please don't ask me how much money I spent trying to buy every release on the GRP and Magna Carta labels. Local music provided something of a financial break, as only a small fraction of local tracks are released for purchase. Contrary to popular belief, while I happily accept free submissions, I never ask an artist for anything, and always pay for my music when I can.

Now of course, restricting yourself exclusively to local music leaves you rather limited in your selections and, more-importantly, very limited in your vision. Surprisingly, when you compare Indy's local music scene in totality to other local music scenes, you will begin to see holes and gaps where you otherwise wouldn't. Certainly we have some excellent talent in this town, but not surprisingly, our music scene is definitely skewed in just a couple of directions: 1) Guitar-driven hard rock/metal bands and 2) "Heartland rock" bands. One could argue that a sizable percentage of the scene is singer/songwriter, but I would also argue this is not unusual in a local scene, and we have far fewer, proportionally speaking, than someplace like Nashville or Memphis.

Let's take for example my second favorite local music scene: South Yorkshire England. As mentioned, it doesn't take much to engage me, and the beauty of the Internet is that you don't even have to live in a particular city to get a feel for who the heavy hitters are. Really, a couple of suggestions from local DJ and social media mate Simon Saynor got me started. Then it was just a matter of googling the local music venues, checking out their gig calendars, popping some names into YouTube and ReverbNation, and boom! Within a weekend I am probably As knowledgable, if not more knowledgabe than the average local.

I plan to feature this playlist on Sunday's Radiothon for the National Hight Five Project during the 10:00 hour, when my special guests will hopefully be Mark Kelly and Simon Saynor of SineFM -- live via Skype. The important thing to ponder when listening to these bands, and something I hope to discuss with Mark and Simon on Sunday, is how different their music scene is when compared to ours. This may owe a great deal to the fact that their local bands that went on to to bigger things include names like The Human League, The Arctic Monkeys, Pulp, The Thompson Twins, Be-Bop Deluxe. Whereas our region has produced Mellencamp, REO Speedwagon, Rascal Flatts, Head East, and Roadmaster. Not sure if it's a subconscious design for bands being unintentionally influenced by the success of others, or maybe there really just is a "regional sound" that permeates everything. Either way, it makes for interesting listening.

Catfish and the Bottlemen -- Rango

Little Mono -- Year of the Drone

Lock Up Laura -- Hold My Breath

Got something you think would go great on this playlist?  Have you got a favorite playlist of your own?  I'm always on the lookout for new music.  Do share!