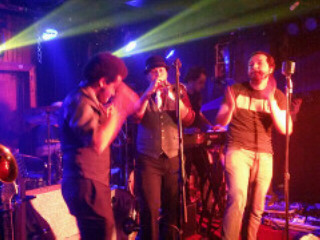 Okay, so I've got this great party planned for tomorrow, and of course those Dell Zell/Audiodacity guys have to one-up me with possibly one of the great shows and most-memorable parties of the past year.  Now, I'm on record saying that I'm somewhat opposed to, yet largely guilty of, the current trend of giving every show a name, or a making showcase, or whatever gimmick you can come up with to sell a dozen more tickets.  I maintain that it waters everything down, particularly when there is very little to differentiate these showcases and the standard Wednesday or Thursday night show. Yay, the same three bands as last week, only now we're calling it "The March 2014 Audio Assault Showcase" or whatever ... which is largely the frame of mind I went into JamTron with.  Call it whatever, it's still a bunch of my favorite bands all in one place on a Friday night ... I'm going anyway whatever label you slap on it.

Okay, standing very much corrected on this one.

First off, taking over the Mousetrap ... nice touch.  I was a bit skeptical about this move, as were a lot of the Trap's regulars when NPC took the stage if you studied the crowd.  Not really an issue by the end of the first song. Though I don't know if any life-long fans were made, certainly they were at least appreciative of the music, if not enthusiastic. It was surprising how just a change of scenery injected a bit more energy into the crowd and performances.

Next, the team-ups.  I liked the idea, though I was a bit skeptical as to what could be done.  It was a folly that could have just as easily backfired as worked if it failed to meet the hype. I'll admit I was secretly hoping for a few new tracks to get written in there, or maybe some stylistic twists on a band's signature tune.  (Right Bastard Shuffle with a Horn Section ... make it happen!)  Still the cross-overs or switch off's or whatever are a great idea worth keeping.  Would definitely like to see more of this in the future.

Finally, the party.  Everyone was there.  Everyone stuck around.  Everyone mingled, inside and outside.  Another pet peeve of mine, blogged about multiple times, are the bands who show up, play, and either leave or sit in a corner and don't engage the audience.  From where I was sitting, all of the bands in attendance stayed the entire evening, constantly walked the venue, hung out, talked to everyone, and generally encouraged the social atmosphere of the evening.  Also didn't hurt that I saw representatives from a least a dozen bands that weren't on the bill in attendance.  Heck, simply everyone who is anyone was there.  My own personal takeaway though, was this picture, as taken by Fiber's "Shipwreck Shep." 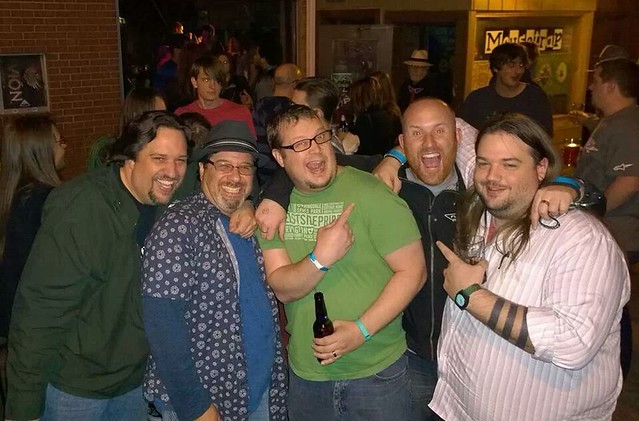 Meanwhile, rare night off for me ... mostly because I've got to go to "Secret Productive Location#2" and chum a a whole metric buttload of stuff for tomorrow.  I keep thinking of things I'm forgetting, which kinda frightens me.  I'm nothing if not meticulously organized.