Mix Tape Monday: Relax with a Nice Bottle of Wine 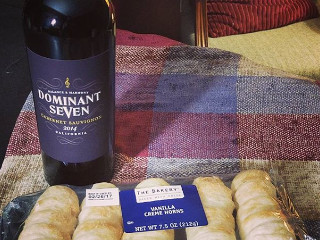 Fine, caught shit for the last two weeks being too self-serving and grotty for the masses. Excuuuuuse Meeee for trying to bring a little culture and eclecticism to your otherwise sad, dreary lives. Still, hey, no problem, I have months of these playlists planned out, I probably just need to rearrange this week's scheduled entry ("My Desi-Influenced Pakistani Club Hits") and swap in something a bit more "pedestrian."

Ah, here we go. We've all got one of these playlists, I'm sure. The one you pop in when you've just had enough of your significant other, your boss, your kids, your dog, and you just want to kick back, crack open a cold one, and spin something from the mellow side of life. Now, as I live alone, it would be alcoholism if I were to drink beer when I'm by myself, however, wine gets a free pass ... because it's classy. It also requires a different type of music, soooooo ...

Darrin's Kick Back After a Hard Day and Drink a Bottle of Wine Mixtape:

Traffic -- Low Spark of High-Heeled Boys You HAVE to start the mix off with this one, because it actually features a "fade in." Well, not this one, because I chose a live version to add visual excitement. Go seek out the album if you aren't familiar.

Rush -- The Necromancer Betcha didn't think I could find a wine-mellow Rush song. Bet you're wondering where the Yes reference comes in this list.

Elton John -- Madman Across the Water Didn't make you wait long for the Yes reference. Don't get it? Google. This version is a bit more "up" than the studio version, which I like better, except that this live version reminds us Elton is a really good improvisational player, while his part on the original is a lot more subdued.

Prince -- Purple Rain We covered this on the covers playlist, but I don't feel like I need to defend it here either.

Pink Floyd -- Dogs Again, going with a live version because it's more interesting, and because I'm not a purist that says it has to be the original lineup or anything.

U2 -- Bullet the Blue Sky It's possible you're getting a little mellow after Floyd, so let's liven thigs up JUST a bit.

Steely Dan -- Aja I know the four Steve Gadd solos at the end pretty much means drummers CAN'T unwind to this one, but the rest of us just go with it. Also, I don't think there will ever be a live version better than the original, so we'll skip those.

Led Zeppelin -- No Quarter On the other hand, this song is a different kind of magic every time it's played live.

The Doors -- The End I will admit, this one makes me feel like I'm in a rice field getting ready to go hunt down Col. Kurtz.

Dire Straits -- Private Investigations Why haven't we managed to get any kind of a Dire Straits reunion since 1996?! It's criminal!