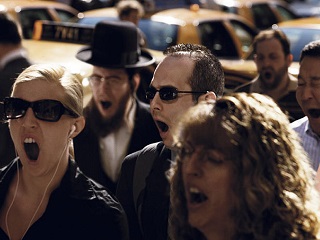 Stream of consciousness ramble today, since I havent' done one in a while, let me just explain: I'm not insane. This is just a thing I do on Fridays every so often where I start typing whatever comes into my brain, and I don't lift my hands or take a breath until the word counter reads at least 500. So, here goes another in-depth look at my thought processes.

I really should listen to WICR more than I do. Haven't tuned in much since Chuck Workman passed ... well, and I discovered TuneIn and the fact that there is definitely a "radio gap," whereby the rest of the world seems to be light years ahead of American radio programming. I say this because I got in a strange argument on Facebook about how "WICR is playing more jazz than classical these days."  (These are definitely first world problems, and I can't believe people are so militant about it.  I though everybody like gratuitous sax and violins -- *drum fill*)  WICR has three signals though, why can't Indianapolis have a separate Jazz station and a separate Classical station and go deep in the weeds with both? This is that same feeling I get when I go to a huge megabookstore and see a "SciFi and Fantasy" section. Or, for you older, illiterate types: Don't you hate when you go to the video store and they have "SciFi/Horror" all lumped together on the same shelf? When I see things like this, I usually assume, and am invariably right, that this means we're getting nothing but the safe/accessible stuff that everybody is okay with, but nobody has terribly strong feelings about.  Which is sort of a running theme with local radio in general these days, I think.  I'd rather have people hate me than have no strong feelings about me.  What advertiser wants to be part of the background noise?

I am all for multi-genre stations. Most of my favorite stations are ones that dedicate an hour to reggae, an hour to techno, an hour to metal, an hour to new pop etc. I kid you not, one of my all time favorites is an hour dedicated to test card music (thank you, Radio Teesdale). Come on, it's an hour. Even if you don't like a particular type of music (because you're a closed-minded snob ... or you're just dead inside), you can surely dedicate an hour of your ear to making absolutely sure you don't like it. Just put it on while you're doing the dishes or folding clothes or something.  Heck, I discovered that I absolutely love D&B music this way, which quickly grew into an exploration of dubstep, edm, trance, and indietronica to see if there was anything else I didn't know I liked.

On the other hand, if I know I'm really not in the mood for Irish grindcore today, thankyouverymuchladdie, I would like to know when the Celtic Metal Hour is (seriously, there really is one), so that I can flip over to a different show on a different station. Don't change your format, don't mix your Blarney Bash music in with the other stuff to keep me from tuning out, just do what you do and I'll be back later on in the day.  I still wuv u.

Am I projecting a fantasy on to history to think that Radio used to be about shaping hearts and minds? Didn't people used to bribe the "cool DJ's" to play their music so that kids would, by association, like it? Didn't radio stations do crazy things to try to distinguish themselves from one another, rather than do their damnedest to homogenize themselves into on of six pre-defined, inoffensive formats and be all things to all people? Is it possible that -- everywhere except American terrestrial radio -- special programming works? I can watch ratings on Indy In-Tune in real time, and there are definite spikes for our Lunchtime Special, The Rock Show, Talk Sunday, and our inexplicably most-popular "show," Studio Saturday (why you people listen to that amateur crap, I have no idea, but it's our most-popular program). Some of these spikes seem to carry over into the music mixes (probalby because the listener fell asleep and forgot to log out), but in general, the one thing people aren't interested in is what radio programmers strive for and refer to as the "iPod on shuffle" format. See, problem is they already have one of those, and it doesn't break for commercials six times an hour.

Circling back to the original thought, it seem to me that radio audiences want to be challenged a little, but for some reason Indy radio (corporate and independent alike) seems terribly afraid to alienate anyone. "Well, don't play too much classical, the jazz people might not like it." "The other 19 Christian Rock stations are doing great, why don't we start the 20th one and play the same stuff?" "These 250 songs have worked great for 40 years, why don't we just change the name of our format to 'Classic Rock' and play them for another 40." "Oh, let's shake things up and change our name because our song selection has gotten too stale and mainstream to call 'new rock alternative,' and we don't have the balls to play new alternative rock. I mean, what do we do if people don't like a song they haven't heard a million times?"

Okay, at least the "soft rock" rebellion seems to be on a decline lately. The latest Arbitrons put WJJK (Cumulus Media) on the top of the ratings. Yes, "classic rock" reigns supreme again, folks. (yay.) Bob Seger and Tom Petty no doubt appreciate the royalty checks, I'm sure.