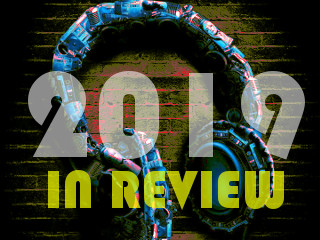 So, we prepare to close the book on another year. It wasnt a reasonably productive one on the Indy In-Tune front, to be sure. Thanks to the complete lack of independent press in Indianapolis, I failed to be nominated for or lose any "Best of Indy" competitions, as has been the tradition for the last decade or so. Yeah, that sucked. It's also bullshit that every one of the LPFM stations have failed to offer me the coveted overnight spot. Just gonna have to learn to live with obscurity, I guess. Oh, and this marks the thirteenth year in a row that I've not gotten around to recording my double-LP art rock concept album, The Lamb Lies Down in Broad Ripple. I guess I really need to up my game in 2020. I mean, I'm pushing my mid #$#&-ties. Probably don't have too many more productive years left.

Let's see, so what DID I get done this year? Well, got a real day job (finally), a nice promotion (after thirteen years of doing pretty much the same thing), decent raise, played a rooftop gig (bucket list), won NaNoWriMo, consequently wrote my first novel (well, just a draft, but also bucket list), oh and joined British Nobility. In my spare time, I kept up my hobby of discovering and listening cool radio stations all over the word, which unlike the ones in Indianapolis, play all kinds of cool stuff I've never heard before.

In keeping with that theme, this week's "Monday Playlist" is dedicated to ten artists I discovered this year that have joined the coveted ranks of "artists I play and talk about so often that it annoys all my friends." Mind you, this list is my personal retrospect  artists new to me this year  not intended to be best albums of 2019, but I did link to their 2019 releases where applicable.

Christelle Bofale -- Origami Dreams There are a few constants from the last five years of doing these lists of "new discoveries." I seem to have graduated from prog and jazz rock to really digging the somber, shoegaze stuff coming out of Austin (see Ringo Deathstarr a couple years back), as well as the modern psychedelia I'm hearing out on the Cali coast. Ironically, this Austin artist comes to me via KSPC in Cali (same show that gave me Mt. Ossa, and we all know how long that obsession lasted). This is just amazing sonics paired with a fantastically soulful voice creating something completely new to my ears. Just great music to let the mind wander to at work.

DIIV -- Blankenship Found these guys on some station during a gray and wet drive in to work, having forgotten my umbrella, and being forced to walk three blocks in one of those rains that was too heavy to be ignored and too light to be even  interesting. They became the soundtrack for my drenched and bored morning and, after going through their catalog, they lifted me out of that funk by lunchtime.

Tiny Fireflies -- Nothing So one day at work, a co-worker walks up to me, shows me his phone, and says, "Have you heard these guys? They've got layers of retro-sounding synth soaked in reverb. It's got 'you' written all over it." Now, it's entirely possible this was intended as a crack at my musical sensibilities, but I'll take it, and Tiny Fireflies, because he was spot on. I LOVED it.

Deerhunter -- Timebends Now, a couple of friends are in to these guys it turns out, but I'm going to give credit to Angela, who has been making her case to be one of my "Musical Yodas" for a while, usually does pretty well picking bands I already like, but scored nicely with this one.

Fews -- More than Ever It's been a while since I got into a Swedish band, and certainly this one is my first post-punk band. Weird how "80's-sounding" seems to be a common theme with me lately. Must be getting nostalgic in my mid-life depression.

Pnau -- With You Forever Australia has been making a comeback with me in the last couple of years, as they have BOTH a psychedelic scene AND a synthpop scene (Sunbeam Sound Machine and Miami Horror both being veterans of this end-of-year list in recent years). If they had good shoegaze, I'd probably immigrate.

Swim Mountain -- Same Mistake Don't remember where I originally heard this -- it was just in my Shazam folder one morning, so apparently, I had a good night. The band seems to get a lot of simplified comparisons like Rod Argent/Zombies meets Tame Impala -- which honestly sounds like something *I* would normally say, but ... nah not about this band ... there's a bit of lo-fi Alan Parsons in there as well if you're going to play THAT game.

Smith Westerns -- Weekend I'm kind of ashamed of this. The band has been around and reasonably popular for years now, and they just appeared in my Spotify recommendations last Spring. Okay, actually I'm ashamed for both myself AND Spotify for the oversight.

Local Natives -- When Am I Gonna Lose You So far we've established, cool sonics, sludgy guitar, reverb, and retro-synth as criteria for how to write a Darrin-approved song, but let's not forget my love of four-part harmony. (Overdriven Hammond organ is also a correct answer, but nobody seems to use THAT anymore).

Frankie Rose -- Dyson Sphere Every year there is ONE artist I get introduced to that gets the coveted "default" setting. That is, in the car, at work, loafing around the house, going to sleep, needing a wakeup track, there's just one artist I just call up like a reflex  probably because Im too lazy to self-assess my mood and I know said "default artist" will fit whatever it is. At the end of the year, Ive streamed them so many times on Spotify that I probably bought them a coke -- half a Starbucks, whatever -- and I feel so guilty I go out and buy their entire back catalog; then the back catalog of every band they've been in, and the back catalog of anyone who's ever been in a band with them. I'm just sayin' Frankie was there for all my many moods this year, and was a really extensive rabbit hole to get lost in, and THAT will mostly be what I remember my own, personal 2019 sounding like.