Gettin Ready for the Rollout 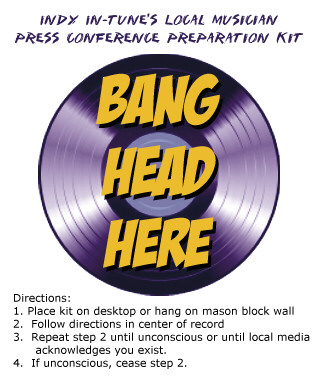 You know what, I've prated about this time and time before, and I'm sure I'll prate about it again in the future, and if people actually disagreed with me I wouldn't get so many "You are sooooo right!" high fives whenever I post one of these.  As usual, the purpose of this rant is two fold, but somewhat loosely related.  I'm lathering again, so sorry for any incoherence.

First off, congratulations to Whoa!Tiger for becoming international superstars by submitting and getting their music played on 102.6 FM in ... get ready for it ... Doncaster, England.  Yes, folks, it seems it is easier to get your stuff played on morning drive-time radio halfway around the world than it is to get a track on the "local music hour (half-hour after commercials)" in your own smegging home town.  You can develop a rapport with radio personalities in other countries more easily than you can get your band's name mentioned in the "Local Music" column in one of our our big four publications.

I have been a fairly regular listener of 102.6 (SineFM) for going on three years, and in the last six months in particular it's been in my top three most-frequently listened to radio stations, despite the fact that I have no ties whatsoever to South Yorkshire, being four generations removed from the ancestral lands.  This is high praise considering my TuneIn bookmarks page now boasts 27 terrestrial radio stations on six continents that I regularly flip between.  In fact, Simon Saynor has every reason to think me a stalker: I send him random tweets in the middle of the night while he's at work (well, middle of the night here, anyway). I comment on his posts regularly.  I occasionally chat online with him ... usually when he's coming back from a bender and I'm getting ready to head out and start mine.  I know exactly where he lives, and based on his oft-blogged love-hate relationship with golden arches coffee, I can tell you that he walks his .6 mile commute to work down Cleveland Street every morning.  I've not yet hacked the Doncaster traffic cam system to confirm this, but Google Street View gives me a pretty good depiction of what the route looks like.

Despite this "creepy factor," still he plays Indianapolis music on his show.  What a guy!

Meanwhile (and the aforementioned second point to this rant), what is happening here on the home-front?  Let's examine:

(Deep breath, because I'm about to step waaaaay out of character for me here.)

For over seven years, I have tried to be the "nice guy" in the local music scene.  I pride myself that I can go to a bar, meet a stranger who vaguely knows who I am, and be assured that I have never pissed off or screwed over anybody he may happen to be friends with.  I have always kept a very low profile and tried to grow Indy In-Tune organically, never seeking publicity through mainstream channels, never stirring up controversy and negative press just to grab attention, and avoiding like the plauge those people who do.  It's about the bands; it always has been ... for over seven years.

Aside from a couple of one-line shots taken at music writers in defence of friends' bands whom I felt were unjustifiably slaughtered in reviews, and at promoters who were blatantly making it more about themselves than the bands (all of these minor digressions countable on one hand) I've held my tongue when it comes to those who do professionally what I do as a hobby and passion.  Over the years, I have constantly sent these people heads-ups as to what I was seeing and doing -- as a courtesy, never seeking free press coverage or publicity.  I did this because I figured they were folks like me, and that they might think a particular band or show was pretty cool.  Maybe they'd want to grab a beer and talk shop.  I've interviewed over 125 local bands and met and hung out with at least twice that many.  I think I could hold a conversation about the local music scene.  Have I ever even gotten a "Thanks for the email, I'll check it out" reply?  Not once.

Indy In-Tune runs two regular music showcases at our own expense (the PodConcerts and Monday Night Live) -- with a third on the way.  We are sponsoring/promoting four others (three separate Shine series plus the Battle of Birdy's).  All of these series are pretty unique and groundbreaking in their approach, have drawn respectable crowds, and have gotten a positive reception from local bands and audiences who participate or attend. Meanwhile, our top-rated radio stations have canceled their local music hours (fortunately the tier-two stations are starting to come around and warm up to the idea).  Our local music festivals are more-and-more about "headlining national acts" in order to make bigger profits.  (Hint guys, quantity is your problem, not quantity ... I'm counting over a dozen festivals competing for the same limited audience at this very moment.)  I, on the other hand, turned down a chance to meet and interview a national touring act last month because I had previously promised a local act I would be at their show that same night.

I go out to listen to local bands four nights a week.  Have I ever seen any representatives of our so-called "music press" out getting the lay of the land?  Seeing what's hot on the street?  Trying to get a scoop on what might be up-and-coming?  Not once.  When I meet artists, I always ask, "Have you ever met [so-in-so writer] from [such-in-such publication]?  Have they been to your shows?  I heard a great new band I would like to turn them on to."  The answer is always, without fail, "Never."  There is a growing belief that these people are just pen-names and that they don't actually exist.

Folks, you've got the coolest friggin' job in the world.  You are professional music journalists! There are people like me that are thrilled to do your job as a hobby, paid for out of our own pockets!  You can't be bothered to go out and catch a show?  Meet a local band?  Return an email?