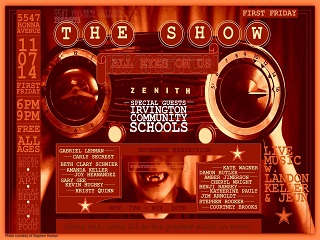 WHAT: "The Show"
WHEN: First Friday - November 7th
WHERE: 5547 BONNA AVE, INDIANAPOLIS, IN 46219 (located in the historic Irvington area)
FREE and open to All Ages


See art by 18 new artists as well as live music from the Landon Keller and the sister duo of Jenny and Julia Perillo, a team called "JEUN" at this unique space created using mostly recycled and reclaimed local components!

There is also a coffee shop within the Coal Factory Development open Tuesday-Friday 2p-9p, Saturday 11-9 and Sunday 11a-6p. They specialize in pour-over coffees, using local products like Bee's and Hubbard & Cravens.

I asked Amy Ward some questions about the event shes put together as well as what is 5547 all about and whats to come, and she was gracious enough to respond.

ME: What are some things you have done and things you are proud of, etc.?

Amy Ward (AW): Since the end of the 2013 RAW season last year, I've been focusing on a series of First Friday events in multiple areas of Indianapolis -not highlighting one specific location- and managing art & music shows for artists by artists.

This year alone I've curated six amazing shows, including Assorted Flavors at Fountain Square brewing co (August) and the September exhibition at the 5547 Project gallery. Each show generated about 350+ guests and the art sales have been successful too!

Personally, I was recently published in the Nov/Dec UNITE magazine, created the album cover for 2014 NUVO's best local band- Russ Baum and Huck Finn- and I've been featured in twenty art/music events in 2014. In 2015, I'm excited to team up with the Stutz artist building for a huge group art exhibition called ARTVILLE.

ME: You also work with Oranje? So, obviously music and art in this city are important to you. What made you get involved in all of this, and how did you go about getting to where you are now, for those out there who want to be doing what you are doing.

AW: I participated as a visual artist in the RAW: Portland show, October 2011, while living in Oregon for a year. Soon after the show, I moved back home (Indy) and inquired about being involved with RAW: Indianapolis.

At the time of my inquiry, RAW: Indianapolis was not 'on the map', so with help of friends, family and about 35 artists (musicians, performing arts, photographers, filmmakers, fashion designers, etc.) the first RAW Indianapolis event was created on May 2012.

I served as the RAW: Indianapolis director for a year and a half until I declined to move to LA to keep my position.

RAW inspired my involvement with Oranje this year; it seemed to be the natural progression because I was adamant about staying connected and aiding local artists -of all types and backgrounds.

ME: Tell me about this First Friday event The Show

AW: 5547 Project gallery is a very unique space, created by owner David Jackson and his team using mostly recycled and reclaimed local components! Industrial features + modern touches + natural elements + local character is the 5547 Project gallery. The 5547 Project is a community based organization focused on presenting art to the public and supporting local artist as an alternative art studio/gallery.

ME: Whats coming up in the future?

One of the evenings musical entertainers was kind enough to answer some questions about his music, what hes about and the upcoming show.

ME: How long have you been playing music and what inspired you to do so? I first picked up a guitar around 2000-2001.

LK: Im a third generation musician so music has always been a huge part of my life. But, I never was as serious about picking up a guitar than when my ex-girlfriend started dating someone who could play the guitar. Ive kept that a secret all these years.until now.

ME: Growing up, or, whenever music started being important in your life, what kinds of things were you listening to, or what stuff was inspiring and motivating you; tell me your earliest memory of music impacting you in some way.

LK: Thriller was my fist record and yes it was on vinyl. I was 3 and was obsessed with Michael Jackson. At 3 they moved tables aside to give me a stage to dance to Michael Jackson at a local Pizza Hut.

ME: Were you in bands in high school? Do you have any funny band name stories, or weird stories like you were once in a hardcore punk band called "Murder the Government" or something?

LK: Ive always been obsessed with music I didnt pick up a guitar until right after high school. I was in musical my senior year, called Crazy for You. Another thing no one knows

ME: How would you describe your current sound/what you do musically?

LK: Its raw and very real, no pedals, no smoke or mirrors, no phony lyrics, no funny stuff. I honestly dont think too much about what genre I fall into. Ill leave that for others to decide.

ME: Whats new with you, what have you been up to? Writing? How often do you play out, talk about any albums youve done, are working on, want to do, etc.

LK: Im constantly writing. I play out about 4 or 5 times a month. I have a new EP out called Confessions, that Im really proud of. Its on sale for $3 right now at https://landonkellerband.bandcamp.com/ This year has been a year of compilation for me. Ive been blessed. I cut a single with an all star cast of local musicians (Jenn Christy, Jeremey Johnson from the Bleeding Keys, Andy Salge from Blue Moon Revue, Ben Jarvis from Audiodacity, and Eric Carter and Jared Hiner from The Breakdown Kings. I played in another band part time with the band Brandon Whyde & The Devils keep. Ive very recently started a side project with Kara Cole called, Fan the Flame that I think could be really special. You might have a chance to see a little taste at the show on Friday.

ME: Something you want to do that is completely different than what people might expect from you like, a polka-metal album or somethingsomething youve always wanted to try or experiment with but havent really.

LK: Ive always thought it would be really cool to find away to put my own spin on old Rat Pack/Big Band songs. I love the lyrics from that time period, theyre remarkable. But, I dont know if that will ever really materialize. I must say that whenever I hear anything done really well, there is always this urge for me to want to do it.

LK: I could write a book on this subject, but Ill keep it short. The scene in this town is blossoming right now. I really do believe that. I was playing original music before it was cool to play original music here. When Indy was strictly a cover bands scene. But the tide has officially turned in my opinion, and really in just the past few years. The venues, promoters, events, and press are really blossoming with the music as well. There is a lot of support in those areas. I must say there are a lot of people in this town and the original music fans are growing, but we need a lot more people to take interest in local music still. If the majority of people gave it a chance, theyd be pleasantly surprised, there is a lot of talent and diversity here. We all need all the support we can get.

ME: What has been one of your favorite places to play, ever, and do you have any amusing/horrifying/strange stories from anywhere youve played? Some Highlights have been,

LK: The Viper Room in Hollywood, The Vogue, Old National Center, and side stage at Klipsch. But, honestly my favorite place to play is at the Royal Theater in my hometown of Danville Indiana. I once received a death threat before a show. Insane. Nothing happened though and I honestly forgot about it when I hit the stage. I have something for amusing, sometimes horrifying and weird stories for ya all in one - Ive signed autographs on a few breasts in my day, which is weird because Im a local singer-songwriter? What was I supposed to do? Say no?

ME: Do you have a musical guilty pleasure, or, what is an album or track you own that would surprise people? Like, are you a closet Barbara Streisand fan? Tony Orlando and Dawn? What is it? I wont tell anyone. *wink

LK: I think Prince is a genius. I love Kenny Loggins. But, I especially like his early stuff. One of my favorite live albums of all time is Loggins & Messina. I love Edie Brickells track What I am and there is something about Suzanne Vegas single, Toms Dinner. I literally cannot change the station when it comes on, and I have no idea why.

ME: Youre kind of a big deal and everyone knows who you are and you have fans and stuff.so what advice or words of wisdom do you have to offer the youth or people coming after you who want to be as awesome and cool?

LK: You cant do anything significant without hard work and dedication. Find yourself; dont try to be something youre not. Its important to remember that there are no rules. You can say whatever it is you want to say, and sound however you want to sound. The possibilities are endless. Also, keep a notebook and a recorder readily available. Inspiration can leave as quickly as it comes. So you have to be ready to take advantage of it when you feel it hit.

ME: Tell me what we can expect from you at First Friday in at The Show.

LK: I hope that my set makes every single person genuinely feel something at some point while Im performing. If that happens, Ive done my job.

ME: Where can we see you next, and where can we follow what youre doing and see upcoming shows, etc.?


ME: Thank you for your time, Landon and Im looking forward to seeing you play Friday.

LK: Thank you, looking forward to it as well!

Make sure to come out to 5547 Bonna Avenue this Friday from 6:00-9:00 to see some spectacular artists and hear some beautiful music in a truly cool space.