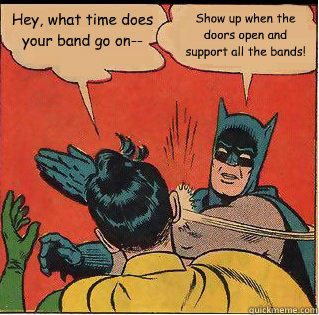 I feel we all agree that there are difficult times for anybody trying to make a career in the music business. Performers, venue managers, booking agents and promoters are all locked in a vicious cycle that forces each of them to look out for their own immediate personal survival, often at the expense of the long-term stability of the community.

The problem starts with the chicken-or-the egg quandary where music fans are going out considerably less often because venues dont present as much great live entertainment as they once consistently used too. With that understood fans were going out considerably less often than they used to as well. Ultimately music fans are fed heaping helpings of the same music until they stop going out, which completes the cycle and sends the community for another go round on the downward spiral. Less fan revenue for the venue means that they cant hire the upper-tier acts, local or touring. This then means that promoters cant raise the necessary money to put their acts on tour, which means local artists cant get exposed to new audiences and local audiences cant get exposed to new artists.

There is a lot of talk in our circles about coming together and showing community solidarity. There are a lot of rallying cries like, Join The Movement, and, Only you can support local music. We all seem to fundamentally understand that our music culture has been imperil in recent years and that a group action is needed to stabilize and strengthen the scene.

However, until we construct and implement some social, economic and communication strategies all of this passion will be wasted. Thousands of fans on Facebook may show how many people love local music and are supportive of its future, but it alone doesnt generate a single dollar or affect a change on the system if we cant get them to shows. We need a number of concrete initiatives to generate the money and critical mass needed to change the local scenes business culture. I will propose one such idea now.

There ought to be a group that essentially acts like a music fans union. We would assert as a group that we want the following out of our local music providers:

This provides fans with more access to better music and musicians with more leverage to promote themselves and be solid contributors to the larger national music scene. This should cut down on acts playing out too much and over-saturating the scene as well. Of course, providing all of this is a substantial risk for venue managers and promoters, so we as consumers need to step up and take care of our responsibilities by:

There is a song called, Hesitation Blues that goes, Woman says she wants a man, but wants to see a dollar first. This is essentially the predicament we are in right now as music fans. No businessperson would be fool enough to risk the bottom line for us if we cant demonstrate the potential for profit. We shouldnt be immature enough to think we can get a better music scene without dedicating and sacrificing a little bit of ourselves.

We can shout from up on a mountain top about how we think our music community should be, but if we want to affect real change we need to consolidate our power and resources to act as a good faith partner with the rest of the industry.