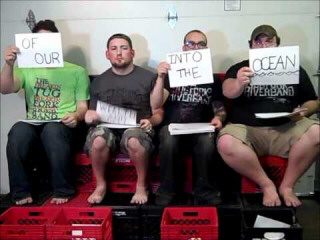 Tug Fork River Band has a jaggedly in your face metal, defined by insistent buildups, intense changes, deft use of dynamics, and energetic drum fills, that has spellbound fans since 2006. Many have been impressed by Tug Forks affect on the local metal landscape since Vultures EP was released last year.

The four-piece from Indianapolis is riffing heads off at maximum capacity with their fourth project No Hope for Man, a metal plated steam engine that runs off of unicorn tears and cheetahs blood. Aaron Quinns vocals are wild and chaotic; the way they should be, and Justin Foxworths guitar work is impressive, complete, but still a brutal assault when it should be for fans. These guys are talented and really know what they want to play and how to play it these days.

Tug Fork has released the best album of their career and finally look to have all the required tools to take on the world. A nice mix of thrash, southern groove, progressive, modern, and heavier grunge that offers up plenty for all and never lets go. This is a brilliant piece of work from a young group that has really hit their stride after the success of the Vultures EP and being voted best lyric video ever by Metalsucks.net just last year.

The songwriting is what sets Tug Fork apart from so many metal bands today. Like all good releases, there are a lot of layers within the music and No Hope For Man is meant to be peeled back and absorbed over time. This is a listen that demands your attention, and the production is top notch. With the strength of songs Junkyard Reality, Death of False Hope and No Hope For Man, their talent takes center stage. Its a sonic metal assault that is sure to leave audiences pumped with adrenaline and banging heads for many years to come.

I recently got a chance to sit down with guys from Tug Fork and ask them a few questions.

What has the experience been like since releasing Vultures EP to releasing the new No Hope For Man EP?

Amazing. We were able to do a short tour with Becoming the Archetype and now they are performing at our EP release with us in July. There has been overall great growth in our individual performances and we arent afraid to challenge one another these days either.

It seems like Bone works with a good majority of the local heavy metal acts so what has it been like working with him over the years on your projects?

Bone has a great ear for the little adds here in there that as musicians we can miss when were so focused on the task at hand. Having worked with Bone on everything we have done, we have really seen him grow through the years with us. He pushes us to play better than when we practice and that has been a huge learning curve for this band. Bone brings experience, fun, motivation, and passion to each and every session and that's why we are so proud to have him apart of every project.

If you guys could pick a song that describes your work ethic these days, what song would it be?

Justin: No Sleep til Brooklyn by Beastie Boys

What inspired you to start songwriting?

Aaron: It was kind of random but it started in 8th grade when a family member went through an ugly divorce.  It helped me channel what I witnessed and was feeling during the time....and it taught me how to connect on a different level with people. One of our first songs in the band was Bottles to Bullets and I wrote it for a friend of mine who battled with alcoholism. If found that as long as its real to you people will respect it, even if you havent personally experienced the situation first hand.

What has the experience been like for you since you started writing?

Aaron: Ive matured over the years but still tend to write from a dark and angry place mostly.  Our last EP was very inward thinking in its content but this new EP is more outward thinking and observation.

What are you hoping people get from this new EP overall?

Aaron: For everyone to keep searching for hope in this world and its people. More importantly for us and our music we want people to find hope in God.

The Tug Fork River Band will be hosting their No Hope For Man EP release at The Hoosier Dome on July 31st with Creations, Cast from Perfection, Remember the Gift, and Becoming the Archetype. Face melting and a night to remember start at 7pm so dont be late!

For more music and news check them out on ReverbNation and find the popular lyric video on YouTube.  Seriously, its awesome.