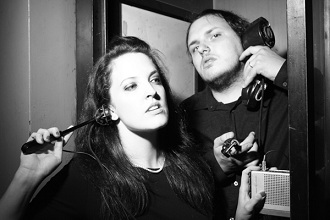 Relayed From:  Cavetone Records (cavetonerecords@gmail.com)
-----
The Ex-Bombers stop at Indy's Jukebox at 306 East Prospect St. in Indianapolis on August 10 for a live performance in support of their vinyl-only release The Tightwire.

Drummer and vocalist Keri Cousins describes their sound as dirtbag spy jazz or beatnik punk. Our songs come from seedy and sleazy places.

Menacing, avant, yet still with pop sensibility, the pair merge an easy but provocative alliance between the flippant sounds of early Velvet Underground/Sonic Youth and the content and style of Soft Cell/Girls Against Boys.

They create these sounds using an 8-string bass, a drum set, a male voice, a female voice, and absolutely nothing digital. This luddite manifesto continues into their album, which has no digital copies and resides only on vinyl.

In 2013, the choice to keep music off of the Internet is a curious one as the myth of rock and roll dictates that by putting music out there a band can make it. The Ex-Bombers and Cavetone Records have a different philosophy. Everything about the band and label go against the grain of a convergence culture and the disposable digital ubiquity of music in 2013.

Singer and 8-string bassist Scott Walus said, Both music making and listening are very human activities that deserve a dedicated space away from the place of textual communication, dirty pictures, and brightly colored games.

The group's vinyl-only release represents a radical culmination of some prevailing cultural and economic trends. The music industry has drastically shifted toward music without physical referent as CD sales continue to decline. According to RIAA (Recording Industry Association of America), over the previous decade, CD sales have decreased from 753 million to 241 million.

While vinyl sales cannot compare to their 344 million unit peak in 1977, record sales currently make up 2% of the annual total sales of the record industry (about five million units) up from its 1993 low of 300,000. This of course excludes the used market as well as units sold outside of SoundScan (a common practice in independent distribution and retail).

According to ICM (Independent Communications and Marketing) the 18-24 age group constitutes the largest consumers of vinyl records, the most malleable age for audience habits over a lifetime.

This 2% foothold of vinyl pales in comparison to the 59% share of digital-only (ex: iTunes) or even the 15% that digital music streaming (ex: Pandora) comprises according to the March 26, 2013 Billboard article by Glenn Peoples.

Many artists have sought to reap the best of both worlds by offering digital downloads with vinyl purchases. However, The Ex-Bombers, as well as all current Cavetone Records artists, provide vinyl as the only manner by which listeners can experience their music.