Whacha Gonna Do When the Well Runs Dry? 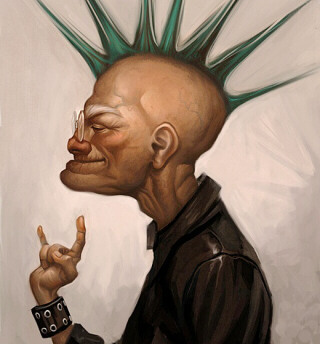 I recently read a very telling article in Billboard Magazine.  For those of you who are averse to reading Billboard Magazine (hey, can't fault you for having taste), allow me to summarize.  Here are the top ten touring artists over the past decade:

Average age of approximately 4000 currently signed major-label recording artists?  About 26.  This is somewhat deceiving.  There are hundreds of 16-20-year-old pop princesses and boy bands, and only about half of them are cancelled out of these calculations as soon as you add in Keith Richards.

Going back, this list really hasn't changed much at all in 25 years.  Most notably, Kenny Chesney has replaced Queen, and Celine Dion has ousted Pink Floyd.  Don't you feel cheated now?  Concert revenue worldwide is a $12 billion dollar industry and accounts for just over 20% of the $60+ billion the music industry makes each year.  It is also the largest source of the 2.4% of that money the professional music industry pays its artists. Sorry, that was a lot of statistics, and I see you've suddenly started looking like a high-school science class on me.  Let me put it this way.

For every dollar the music industry brings in, a quarter comes from concert revenue.  Artists get 2.4 cents, mostly of which comes from that quarter -- since they were directly responsible for generating it.  The remaining 97.6 cents of the dollar goes to the board room execs to secretaries, sales and marketing people, talent managers, etc.  Artists are generally expected to use their 2.4 cents to pay for the roadies, managers, recording engineers, t-Shirt vendors, marketing team, from their tour.

Now, while you're drowning yourself in cheap bourbon knowing you'll never be able to afford your own swimming pool to drown in, how many more years do you think the music industry has before these top ten cash-cows (and believe me, the next ten aren't much younger) are done with all but the obligatory one-off appearance at a major sporting event or humanitarian disaster?  While there have been some great bands coming up in the past 10 years, who among them is capable of filling the gap and keeping the large concert venues packed with fans?  How will the industry make up this dent in their revenue?

I'm sure they have expert analysts looking into this, right?  I'm sure they have a plan.  After all, they've been right on top of that whole "digital revolution" and the decline of physical media, right?  That didn't cost them two-thirds of their total revenue.  They just made that up by suing their fans for sharing music.  I bet they have plans right now to file class-action suits against all of us who failed to purchase tickets to see Britney's show when she came through last year.

Continuing to raise ticket prices certainly can't be an option much longer, either.  Already the top acts, with their $100 and up sellout prices, are subsidizing small acts, which only pull in a fraction of the audience for a fraction of the price.  Most large venues lose money, as facility charges are cost-prohibitive for all but the large acts. (This is largely why they have done away with their historical names and become billboards for Old National Bank, Klipsh Audio, Verizon Wireless, etc.)  Meanwhile, large acts often charge the facility for the honor of hosting them, in addition to requiring extra security, extra parking attendants, etc.  This forces the facility to make up the lost revenue by, you guessed it, raising concession prices.  The biggest of the big acts may even demand a portion of concession revenues as well.  Okay, maybe Jimmy Buffet deserves a couple bucks for every margarita sold at one of his shows, but should Selena Gomez get a cut of what parents spend on pain-dulling gin shots at the bar while their kids dance around in the aisles?  She already got the money for the unused tickets. She's not even old enough to drink!

What's the answer?  Higher ticket prices?  They will try, but the current economy and attitudes towards popular music won't support much more.  Replace one and two-band tours with more 15 band, multi-stage music festivals?  Likely.  Allow venues like Klipsh that are only used a couple of months out of the year to shut down? Hold more concerts in sports arenas like Conseco, who can more-readily absorb a potential loss from a bad show?  Almost certainly.

I recently heard a comparison between the music industry and the sports industry which has completely shaped the way I believe the most-successful path to success lies for them (more on that later, or just talk to me next time you see me offline -- I gots me a vision).  This is another great argument for that model:  Corporate music is the turn-of-the-century New York Yankees.  Under the management of Steinbrenner, the focus of the team's purchasing power went into buying aging veteran players that would win games and put butts in the seat.  This was done at the complete neglect of the farm system, where new players are groomed so as to give you a ready crop of young talent to pick from as your heavy hitters retired. The cost was passed on to the fans in the form of higher ticket and concession prices.

I firmly believe this is the case with the music scene.  The next generation of talent is no doubt there, it just hasn't been properly groomed yet, and neither have we the fans.  The question is, has anybody in the boardroom noticed this? Is anybody there doing anything about this? Are we getting ready to see another repeat of Steinbrenner, completely oblivious as to why the more money he spends, or expects the fans to spend, the more he loses?