What Your Taste in LOCAL Music Says About You ... In the Sack 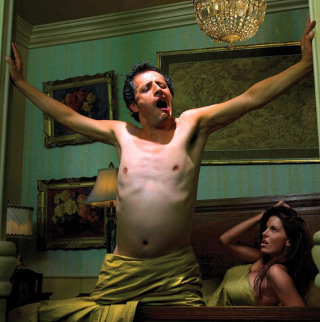 Even more dreaded than the quintessential first date question: What kind of music are you into?  Is the one that inevitably follows: Who is your favorite local band? Well, okay, maybe it only follows if you're on a first date with me.  That's because I'm shallow and judgmental, and I know how you answer this question tells a person a lot about how you are in the sack...

Swig -- You prefer to do it doggie style so you've got a place to put your scotch and your ash tray.

Audiodacity -- Your idea of a perfect date is candlelight, soulful music, wine, and soft lighting.  Then unexpectedly, you body-check your partner into the coffee table, then pick up their unconscious body, carry them off to the bedroom, and start the whoopie machine.

Dead Squirrels -- You like an audience, and a wingman, or at least someone who stands just to your left and owns a buttload of electronic gadgets.

Ryan Brewer -- Most of your sex life consists of people inviting you over on five minutes notice, and you're too nice to say no.

Jethro Easyfields -- You often use your powers of charm and confusion to convinvce prostitutes to pay you for sex.

Whoa!Tiger -- You like to make love wearing nothing but your socks.  They're tie-dye.

VilaFishburn -- You don't have sex very often, because it takes you four years to get the lighting and mood just right.  When you do finally get around to it though, it's friggin' amazing!

Dave Vogt -- Your average lovemaking session is very fast and intense.  It lasts about 57 seconds, but it's friggin' amazing!

Jeremy Vogt -- Every time you make love you add another person.  It's gotten ridiculous as you can no longer fit everyone on your bed and can now only have sex in furniture stores and mattress shops.

Rat Shovel -- You're trying very hard to be like your elder sibling, The Red Rash.

Ben Myers -- You're good enough to be with other people, but mostly you're happy playing with yourself.

Kolo Bell -- When you're about done, you hold up a finger and shout, "One more!"

Zero Boys -- All the kids say you're amazing in the sack, but no one under fifty has ever had sex with you.

The New Guilt -- You have absolutely phenominal sex, and just when your partner is about to climax, you move to Florida.

Dell Zell -- While having sex, you like to give quick shout-outs to all of the other great people your partner should be having sex with as well.

And Away They Go -- You're always posting pictures of sheets, empty wine bottles, discarded clothing, etc.  Thus far, nobody can confirm you've actually had sex with anything though.

Spanking Shakespeare -- You're always talking about the next person you're going to have sex with ... while you're in the middle of having sex with your current partner.

Jenn Cristy -- People are too intimidated to have sex with you.  Probably something to do with burning down your partner's house every time you put on an extra low-cut high-rise dress.

Chad Mills/Upright Willies -- Your ideal date involves a bottle of honey jack, drinking like fish with a perfect stranger, then waking up alone on the corner of 600 North and 600 West with a fiery ring.  Don't worry, this too shall pass.

Breakdown Kings -- You could have sex a lot more often than you do.  The problem is coordinating all of the schedules with all of your friends, because you refuse to do it unless everyone can be there.

Man Super -- People refuse to have sex with you just so you'll write a song about them.

Werewolf with a Shotgun -- You believe there's always time for one more.

Henry French -- You're just so darned cool that when your partner's significant other catches you, they let you finish before kicking your ass.

Coup d'Etat -- You've had to stop having sex because buying your partner new clothes, after you ripped their old ones off, was getting very expensive.

I, Exist -- The sex is fantastic, but still you're secretly irritated that nobody gets that your positions represented a five-part extended metaphor based on the Bugdava Scrolls of ancient Mesopotamia...