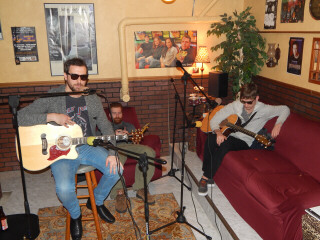 Interesting thread developing from this morning's "Lightning Round" question, (If you could rid the world of one song...).  It seems, while we all pretty much have our opinions about what constitutes good music, we're all in nearly-unanimous agreement about what is bad music, and why it's bad music.  It just so happens that almost without exception, the bad music has made millions for some team of artists, producers, marketeers, and boardroom execs.  Honestly, it's not jealousy, because I think everyone has a rational, lucid explanation for why their particular song of choice needs to be removed from existence.

Steve Boller plays Shine in the Village tonight -- Sabbatical, 7PM.  Not sure if I'm going to be able to make that one, or Kolo Bell's other open mic which follows.  It all depends on the whim of Lil' Q, and I believe she had her heart set on listening to music and baking cookies tonight. So I'm trumped, sorry gang.  Three-year-olds rule.  I'll send you cookies if you ask nicely though.

For those of you who, like me, are unable to attend a live music performance, we cordially invite you to tune in and listen to Irish's debut at the ol' Studio B console from 8PM to midnight.  You'll hear a nice free-form conversation with Irish, Chris Burch, Steve Boller, and Brandon Cannon; an in-studio, in-the-round set from Chris and Steve (their first time playing together, I do believe); and of course music from several of Irish's favorite local artists thrown in to boot.  I'm thinking this will definitely be music to decorate cookies to.

For those of you who enjoy late-night Skype/chat sessions, I'll be around after 10PM this evening with the goal of knocking a card or two off the SpringPad notebook.  My guess is we'll finally get the blog section of the site updated to be a bit easier on the eyes, and if there's time, maybe dig through the archives and add another show to the Mini-Concert Archive to go with the Burch/Pedigo show that I already have ready to load.  Show me an IM or a request if you're so inclined ... I'm always up for a good late night chat.