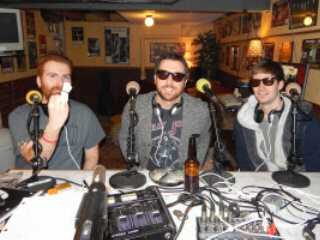 Irish and I were joined by Chris Burch and Eric Pedigo (hung over) in Studio B today to record the remainder of the inaugural "Sound Check With Irish."  I'm pretty happy with everything except the interview segment.  I realized after the fact that it's ambitious enough to do an hour long interview, but at least when I do it, I throw in 15-20 minutes of music to break it up.  (Even I'm not Terri Gross.)  Fortunately Brandon Cannon also happened by today and was able to chime in with a few ideas.  I made a very conscious effort not to be on the mic at all today.  I hovered around taking pictures and doing the engineer bit, but only a couple of times did I interject advice or anything.  It's harder for me than you might thinking.

In addition to the interview, we got a nice "in the round" set from both of them. Perhaps you listened in the simulcast or watched the video feed of that?  Surprisingly, a lot of people did, which is usually difficult on a Sunday afternoon.  You'll get to hear the performances again tomorrow night, after which time they'll be added to the Mini-Concert Archive for you to stream at will.

We completed the evening with a fine performance from Mr. Burch at Shine (the original at Castleton Grill), where we were joined by Jamie Jackson (who is the local music scene, after all) and a singer/songwriter out of Bloomington whom I had never met but will be playing there in a couple of weeks, very nice lady.  It also dawned on me, as it probably will on you when you listen to "Sound Check With Irish" tomorrow, that Chris was singing the praises of his performance at Castleton Grill during the interview earlier that day, even though he hadn't played there yet, because it will be past tense tomorrow.  So listen for that, and rest assured, it's all true, even the bit about the monkeys.

Tonight was spent doing final edits on SCWI, most-notably the interview section.  I think everyone will be pleased with the final result.  I'm definitely looking forward to having voices other than my own on the station.  It seems somewhat hypocritical to ramble on the way I do about how radio is boring and lifeless, and then own one of the most-boring, most-lifeless stations out there.  Irish is nothing if not energetic and distinct in his personality ... well, people seem to like him anyway.  Let's hope so, because I just gave him Tuesday night.  Which leaves me only a couple more, plus drive time, plus workday afternoons.

So who else out there wants a shot at their own radio show!?