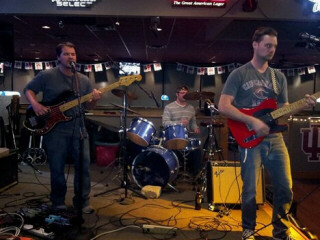 Fun night for music.  I've missed only a handful of Kolo Bell's open mic nights at Claude and Annie's over the past 5+ years.  Heck, I was a regular back when Rory Connolly of the Great Hookup ran them for the year before that.  It's been a really wild ride.  Over the years that particular open mike has spawned Swig, Black Market Binary, The Dead Squirrels, Coy Koi, Dave Vogt, Megan Hopkins, and a slew of others.  I'm still pushing to get Mike Myers, Ben Myers, and even Kolo Bell himself out into the mainstream.  Whoa!Tiger's Jack Barkley and Ben Brashear of Free Willie Nelson Mandela are regular performers, as are a few other long-time players who are no longer active in the scene.

Last night we were paid a visit by Parker Anderson, recently of Pick up Park, who played us some of the new stuff he's been developing using loopers and effects pedals.  Also caught the debut of a new band called Negina, which despite a few rough edges obviously knew their way around that post-punk, indie rock genre.  Thoroughly enjoyed both of the newcomers, hoping them come back and keep shaking things up, as the downside of these open mics is that we quickly get complacent hearing the same set from the same people every week.  In a sense, it turns into a social hour for the regulars, and the music is pushed to the "human jukebox" realm while we all sit around and chat.

On the website front, as promised we've got the Chris Burch and Eric Pedigo performances from SCWI split into tracks and added to the mini concert archive.  You'll also hear selections of these exclusive performances throughout the day on Indy In-Tune Radio, so why not leave it dialed in.

Weather blows in tonight.  Making a mad rush home, as Ms. Kileen has reminded me that I have yet to get this week's Rock Show assembled and loaded to the server.  I've got about 2 hours, and it takes about that long if everything goes right.  The rest of you get out and buy your eggs, milk, and bread early.  Then hunker down, make some French toast and be safe.  I'm thinking Saturday will have to be an all-request afternoon.  I know *I* don't want to drive anywhere, so we might as well be your companion while you shovel the driveway or something.  Who wants to put on snow shoes and come play co-host?