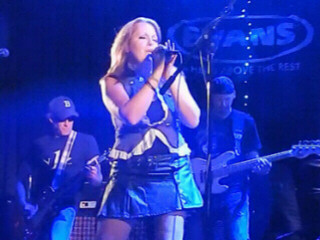 As predicted, mad rush to get The Rock Show out on time tonight.  I really need to start making these people submit finished shows, or at least make them submit everything for the show.  I love Mia to death, but she has this unfortunate tendency to call up tracks that I don't have, and much of the time are not available for download anywhere.  This is still preferable to when she picks ones that don't exist, or a song from a different band with the same name. (Did you know Chakras is a goth rock band in Cincinatti, Ohio as well as a folk band in Dublin, Ireland?)  So here's tip #1 for you folks looking to sell your music: The standard, universal format is MP3.  I do not want to pay for a WMA, MPG, or ACC file.  The station streams MP3's.  That little device I carry is called an MP3 player, not an OGG player.  If you make me buy some crazy format, I have to find some way to convert it back to MP3, and that is annoying and time consuming, especially when other people are sending perfectly good MP3s to me.  Tip #2: make sure your song exists.  Mia can't play music that doesn't exist, and since she makes up songs on the spot, it is your responsibility to check with her periodically to see what songs you've written lately ... then make sure they're available on Amazon as MP3s.

Seriously though, I tease her because I'm just stressed out.  You can't help but love Mia, despite this tendency to want to strangle her sometimes.  Ask any hard rock/metal player in the city about her, I think she knows them all now.  She's good people, and she was my first choice for the mistress of metal slot on Indy In-Tune. The Rock Show was the first of our presented, original programs, and still one of our more popular.  Last summer she organized "PodConcert V" and booked all "Rock Show bands" for a killer guitar-crunching night.  It ended up being the second most popular PodConcert to date, with nearly 200 in attendance -- phenomenal for the Friday of Labor Day Weekend.  There is currently a push on to expand the audience for the Rock Show, which has leveled off lately while the rest of the station has been gaining listeners since the Battle of Birdy's.  To that end, Mia recorded three new bumpers to promote the show today.  One is reasonably straightforward; one is what she dubs the "Porn Star Take;" the third was, at my suggestion, had a "Dominatrix" theme.  (This has to be one of the few jobs where a boss can ask that of an employee and not get his ass sued off.)  That last one, rather that producing the "sex appeal" I was hoping for, ended up going more towards the creepy side.  I likened it to having your car break down on a dark road, and the only mechanic who is open is a particularly psychotic looking burnout who doesn't really know how to fix a car, but you're afraid of what he'll do to you if you don't let him fix it.  I'm sure it will have the desired effect for everyone else though, it's probably just me.

So today is the first "Snowpocalypse" of the year.  Expecting I'll be trapped at home all weekend now.  Please come see me if you can walk or find a safe way to navigate my subdivision (hint:  Park at Claude and Annie's and just walk north up the train tracks).  For some reason the early snows (particularly the ones during the holiday season) make all melancholy -- like I want to open all the curtains, make a bit pot of Lapsang Souchong, and work from the dining room table, staring out the window, and listening to New York style Jazz.  In reality, I'll be standing at the console down in the basement, chain smoking Winstons, slugging beer, and listening to god knows what because there really is no Jazz on Indy In-Tune except for Jeff DeHerdt, who is awesome, by the way, you should listen in this weekend, 'cause I'll probably play him a lot more frequently than normal.

Not sure if I'm allowed to divulge the plans for the weekend or not yet.  Irish indicated there were two popular local acts who were interested in coming up and doing a live spot from Studio B, but with the winter weather Armageddon upon us, I probably shouldn't say until one or both are actually in the building.  Needless to say, you should stay tuned, or at least watch the social media feeds around noon for some last-minute announcements about live streams.  We'll keep you posted.