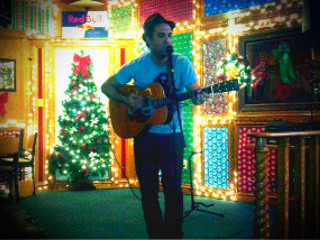 Ahhhh, Friday at last, and a particularly productive week compared to most.  Saw plenty of great music, with more still to come tomorrow night with Mighty Mia's birthday bar crawl and the Swig/NPC show at Three-D's tomorrow night.  Also looks like we will be doing live radio tomorrow afternoon, assuming I have the ark finished by then.  4-6" of rain!?  Isn't that kind of Biblical?  If I do my math right, that would equate to two feet of snow if it still snowed in December in this state.  Last time we had a rain like that (about ten years ago), the standing water in the back yard came within a foot of pouring into Studio B.  I distinctly remember freaking out that my homeowner's policy didn't have a flood clause in it.  Let's hope it doesn't all come down in an hour this time and gives our sewage adequate time to keep up.  In any event, it sounds like we'll be giving you live sump pump updates as they happen either way. Thus far Farewell Audition is scheduled to make an appearance in Studio B, but there was a pretty large invite list, so you'll never know who is going to pop in ... best just to listen and be surprised.

Had a great time last night checking out Landon Keller, solo-style.  Another much-loved artist from our local scene that I first encountered four years ago at Kammy's Kause.  Apparently I was unaware that he moved back into town a few years ago and was playing regularly.  I assure you, had I known this, I would be booking and using him a lot more frequently than I currently do.  I've owed him a podcast interview for at least a year now, so expect that to happen within the next month.

New idea, one which came up in conversation last night.  Already plans in the works to form a loose alliance of local businesses to promote local music (a commercial-free, work-safe version of Indy In-Tune) in their shops/restaurants/establishments in order to save ASCAP fees and raise awareness of the local music scene.  Obviously, the next logical phase is to raise awareness of our local scene across the region, the country, and eventually the world.  We've already seen that Indianapolis is singularly unique in it's lack of interest in independent music.  I've actually gotten some of our local artists played in England, Ireland, and Russia easier than I've been able to convince our local radio stations to show support.  The new plan is, using TuneIn and my penchant for listening to fine radio stations everywhere, to compile a list of independent radio stations and build relationships with those personalities such that designing and building press kits and mass-mailing promotional CD's to these indie-friendly stations on behalf of member artists.  The catch being that a common "Indy In-Tune Branding" on the material, a personal relationship with the disc jockeys, and a knowledge of which genres each station is most-receptive to, will increase success over what the individual artists and even the "mass mailing promotion agencies" can do.  It's a thought, but I think it really plays to a lot to the assets that we've already built over the last 7+ years around here, and it would be damned near impossible for anyone to catch up to what little I already have in place.

Again, just a thought?  Any rebuttals?