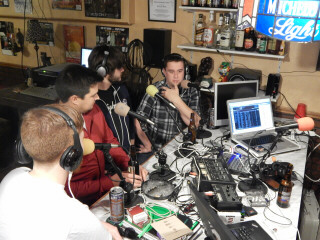 I still lament the fact that no weather person or computer algorithm can seem to crack the mystery of Indiana weather.  Snowpocalypses become light dustings, record heat warnings barely crack the 90 degree mark, and what they said was going to be a flood of biblical proportions turned into just a real dreary, rainy day.  (*sigh*) Not that I'm wishing for severe weather or anything, I just feel kind of band for the yapping craniums hunched over radar dishes to no avail.  To my surprise, there are still people in this state who follow the Farmer's Almanac and swear by its accuracy as being superior to that of the Certified Meteorologist.  Come to think of it, I have no idea what it takes to be a Certified Meteorologist.  I know that it only takes $20 to become a Licensed Psychic and $30 to become an Ordained Unitarian Minister, but I always assumed Certified Meteorologist was the one member of the imaginary journalistic profession that probably had some inkling of whatever it is they are rambling on about.  Please don't shatter this thin thread of hope left in me and tell me that these people at least had to pass a couple of tests about cumulus vs stratus vs cirrus clouds or something.

Farewell Audition dropped by Studio B today to record their segment for Sound Check with Irish.  Yes, I promise we will get to Episode 2, 3, and 4 eventually, probably just in time for ol' Irish to go on hiatus sometime in mid-January.  At least, I certainly hope so, because we've recorded a whole lot of awesomeness so far between Audiodacity, Jeff Byrd, Pedigo/Burch, and the aforementioned Farewell Audition boys.  Major problem seems to be the sheer amount of time needed to train him put a 4-hour show together on his own, although the goal is to eventually just have him do it live, which as we've seen leads to whole new forms of chaos.

Currently getting ready to head out to Northbound Music Showcase, this month featuring Thomas Wayne Pruitt, Swig (in possibly their final performance),  and No Pit Cherries (whom I haven't seen in a few months).  I'm starting to think that maybe the idea of Showcases and Concert Series was a bad idea, at least, and I say this being one of the offending parties, I'm certainly getting sick of seeing them.  Seems now everybody is doing a showcase, which sort of dilutes the effect and created this sort of artificial inflation where the value of just going to see a plain ol' show is now worth a lot less than it was originally. Worse, all of these Showcases are really just plain ol' shows with a logo when it comes down to it anyway.  See, the problem here was, when I did PodConcert 1, I had this vision of actually upping the ante for shows, providing bags of chotskies, discount passes to the next show in the series, exclusive access to photos and downloads of the show, etc.  Never did get around to that and basically put on a just a plain show with a souvenir program, which now everybody is doing, sans souvenir program.  Probably should get back to that original concept, eh?