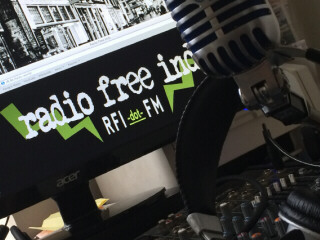 The ability for people to try to stir shit up never ceases to amaze me.  Already I've gotten posts and messages from people implying some sort of feud brewing between Indy In-Tune and Radio Free Indy.  Come on, those guys are still in the larval stages.  Please don't start in with taking sides or swearing loyalty to Indy In-Tune or whatever it is you're trying to convey.  As a gesture, your loyalty is appreciated, but honestly, I do not require us to "go steady" or make any kinds of commitments.  In fact, I here and now encourage all Indianapolis artists, whether you've worked with Indy In-Tune in the past or not, to give Radio Free Indy your support.  Send them letters/posts of encouragement.  Send them your music.  Go and help them get off the ground the way you guys helped Indy In-Tune take off.

I think most people forget, or probably don't understand, that Indy In-Tune began as a podcast, back in the "second wave of podcasts," when almost nobody knew what a podcast was, and all of the various podcasters worked together to encourage, teach, validate, and support not only each other's shows, but the medium of podcasting as a whole.  We understood (as I've always preached to local bands) that one person's success merely exposes the rest of us and attracts new audiences to the scene.  Not only that, but on a more selfish level, it completely vindicates me in that at least one other person, whether they knew about Indy In-Tune or not, thought that an all-local-music format was an idea worth pursuing.

Indy survives with 23 terrestrial radio stations with any kind of meaningful kilowattage.  If you measure Indy In-Tune against those, we have about 2.5% of the audience of the last place station on a good night (and their ratings were referred to as "molecular" ... ouch!) -- so obviously there's a lot of potential listening audience out there to go around, not to mention plenty of need to raise awareness of the medium.  Frankly, I just spend the last several hours listening to their station (*gasp*), and beyond the concept, I see very little similarity between what they do and what I do.  They focus, currently anyway, on more of the well-known, top-tier rock-based artists, they feature local events with the DoItIndy Radio Hour (very entertaining show, be sure to catch that one), and their presentation style is much more polished and smooth.  Indy In-Tune, on the other hand, features a mix of all genres and experience levels, no repeats in a given day, exclusive live performances and interviews, syndication of locally-produced podcasts, and let's face it, I've got a face for radio and voice that really never should have gotten out of podcasting.  I revel in my amateurism and flaunt the fact that the whole station runs out of my basement off stuff I found in a junk drawer.  If nothing else, the newly-added competition will help me to find my focus and concentrate on those things that make up the personality of Indy In-Tune and differentiate us not only from RFI, but so-called mainstream radio in general.  We've got a storehouse of local music knowledge here, a vast collection of exclusive audio (interviews, studio tracks, live performances) that nobody has ever heard (mostly because I'm too lazy to edit it), and a license to be as crazy and experimental as we want to be.  Over the next coming months, I'll be exploiting that, and no doubt reminding all of you that the crux of this whole thing is:  I have no business being in radio, folks!  I'm a music-loving software engineer that got bored one night about eight years ago!

Have I said to much again?  Blown the illusion?  Go listen to Radio Free Indy,  just don't forget to come back and check out your old buddies here once in a while too, okay?