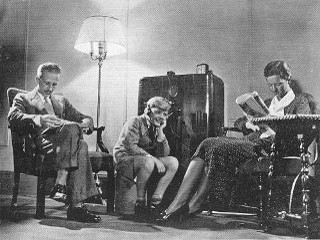 I guess I've kinda been in my own little world lately -- or more like I've been listening to the rest of the world, because...

Yes, for the 18th month in a row, Indy In-Tune has failed to even climb onto the chart.  No surprise, I don't play all that much country music or ... wait ... soft rock!?  What the hell has happened to Indy!?  I know the kids and the "cool people" don't listen to radio anymore.  I know that my vision of blue-collar assembly lines jamming out to album-oriented rock stations is a thing of the past, as are the assembly lines themselves.  But seriously?! B105.7?!  WYXB!?  That "pink and aquamarine station" my MOM listens to is the market's top-rated station!? By a landslide!? A 14 share is INSANE when pretty much every frequency on the dial is occupied; a 14 share to a soft rock station in a major metropolitan area, "Tom Cruise insane."  That my mom is in any way in touch with popular music is downright apocalyptic.  I love my mom, but come on!  She once made me order an Esteban album online for her for smeg's sake!  (Seriously, this is on my credit and surfing history now, sitting on some hard drive at the NSA, waiting for the day when the government needs blackmail material to keep me in line and spilling their dirty secrets.)

The only upside I see here is that at least top honors didn't go to some corporate-controlled, soulless, computer-programmed station run from a boardroom 1500 miles away.  No, it went to a corporate-controlled, soulless, computer-programmed station run from a boardroom right here in town.  Well, a second upside is that the endless numbers of "God-rock" channels are still failing to make a dent.  Really, I'm not sure which faction I want to finally admit they've bled this turnip dry and leave the business first, ClearChannel or K-Love.

Maybe I'm missing something here.  Q95, freefalling down a slippery slope since they sold their personality a decade ago, drops below a 5 share for the first time in ... EVER ... at least as near as I can remember.  Ummmm ... Wow!  People can finally get sick of listening to Lynyrd Skynyrd, John Mellencamp, and endless commercials.  Who knew?  If you factor in stations that people I know actually DO listen to, like WTTS or WITT, then I'd be willing to bet that they've also dropped out of the top 10.  Yet, still, they persist with their same tired tactics.  Incidentally, for those of you who decry the death of rock and roll, I'm pretty sure if it was counted as an Indianapolis station, WTTS would be coming in at least 3rd, possibly 2nd, on that list and would easily be tops with the under-40 demographic.  So it just goes to show you that numbers and statistics are complete bullshit.

Meanwhile, Internet radio has quietly doubled its listenership in the last five years, and the number of on-line radio stations (not counting streams of terrestrial stations) has quadrupled in that same time frame.  Indications are, awareness and listenership should double again in the next three years, so I think the heyday of Indy In-Tune ratings is still to come.  (Please remember us next year when NUVO does its "Best of Indy" picks.  I just want to be ON the list, I know I'll never win.)

Assuming that prediction holds up, I would like to further predict that this means that ClearChannel will find some way to ruin streaming radio for the rest of us.  Hell, I'm surprised the unholy union of Yahoo! (who ruins every on-line service they touch) and ClearChannel (who ruined American radio in general) didn't completely destroy music altogether.  You just know they're gearing up for something even more evil than iHeartRadio.

Also in my cauldron of clairvoyance, I foresee that, while it's kind of cool and novel now, in five years copyright laws will be watered down to the point that having a streaming radio station in your basement is pretty much going to be like having a LiveJournal was back at the turn of the century.  While this would probably be the death knell for Indy In-Tune, it's really good news for Evanescence as my mom will finally get to hear them.

(Tangent and footnote: Personally, my vote for best broadcast station in town goes to WHJE, the Carmel High School radio station.  Seriously, check this one out, guys ... well ... next time you're on the far north side of town anyway.)