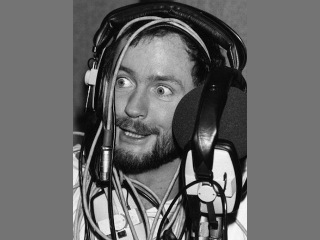 Back in the mid 1970's, when I first discovered radio, I was living in a small-town of Herrin in southern Illinois -- the equivalent of Elletsville or Brazil, I'd say.  When we weren't busy doing the stupidly dangerous things that kids did back then, single-handedly building the market for what would one day be a global empire of a warning label printers and helmet manufacturers, our favorite pastime was recording fake radio programs on our shoebox cassette recorders, which every kid had as they were sort of the PlayStation of the era.  These shows were largely based on two big influences:  Jonnie King's Breakfast Serial and Captain Kremmen of the Star Corps, both of which aired daily on the local college radio station two towns over.

Captain Kremmen was nothing more than a 3-minute comedy sci-fi short aired daily at 5:04.  Think Flash Gordon meets Hitchhiker's Guide to the Galaxy, but really nothing more than one guy doing about a dozen different voices and accents (well enough that I didn't realize it was the same guy doing all the voices until many years later).  The jokes consisted, in retrospect, of the type of belch and fart puns that every 8-year-old thinks is hilarious, combined with type of borderline adult humor that completely went over our heads (he had a character named Cupid Stunt, which sounds innocuous to anyone except the guy with his finger on the delay button).  Personally, what really captivated me was the unconventional use of various sound and vocal effects, which I spent hours trying to replicate with my limited resources and third grade ingenuity.  Actually, you'd be amazed what a screwdriver to loosen and tighten various components of a tape recorder can accomplish acoustically.


When I moved to a new town a couple of years later (we constantly moved when I was a kid  I think Dad must have been on the run from the government or something), nobody there had heard of Captain Kremmen, and I quickly made friends and influenced people by throwing the complete catalog of his one-liners and jokes into my casual conversation, cementing my reputation as the "funny guy."  Heck, those gags still comprise about 20% of my sense of humor.  In fact, if I ever say anything you think is funny, I guarantee it came from one of five sources.  I'm probably saying too much by giving this one away.

A few years ago, I came across a bunch of old Kremmen tapes I'd recorded off the air thirty years back and gave them a listen.  As an adult, the jokes were a bit dumber than I remember (although I finally got the Cupid Stunt gag), but they were delivered with a sense of speed and timing such that, even if they weren't funny, the way they were delivered was.  Above all, the production style was still unique and far beyond anything I've heard since, and I listen to a lot of radio/audio productions.  As I had always assumed this was the work of some communications student at the local college, I decided to do some Googling and find out who put those shows together.  No doubt he'd gone on to bigger things -- maybe I'd drop him a note thanking him for being such a big influence on me as an impressionable youth.

Imagine my surprise when I found out that Captain Kremmen was not the product of a small town yokel in southern Illinois, but was actually the work of Kenny Everett, a very famous disc jockey and comedian in England who had quite a stellar career in radio and television.  At least this explains why my humor tends to gravitate heavily towards the British style in terms of timing and delivery (and why none of my friends think I'm funny).  Also imagine my dismay to learn that he had died of AIDS just a year earlier.

Recently I came across and purchased his autobiography, The Custard Stops at Hatfield, written in the early 80's, and chronicling everything up to what is probably the peak of his career.  The book is everything I expected it to be, and I keep picturing Kenny's voice (or at least the slightly off affected American accent of Elvis Brandenburg Kremmen) in my head while I read it.  While it does give a deeper insight into how a mind like that works -- not as well as one would think, it seems  the real treat is hearing about how one of my heroes got his start doing stupid, dangerous things with his friends and in his spare time, grabbing a tape recorder and making fake radio programs in his bedroom.  So at least I was on the right track at one point.  I just got lost along the way.

To hear a bit of Kenny's genius as a DJ, check out this archive recording of his "Bottom Thirty Countdown" circa April 1980.