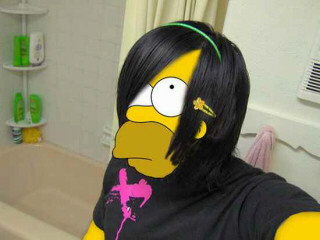 College probably taught me nothing of value in my chosen field (computer science), as I seriously paid four years of professors to tell me that PC's were toys and beneath me. I should stick to mainframe programming. Even inductive reasoning doesn't hold up in the FaceBook era when people can just invent whatever source they want in order to provide "definitive proof" of any position, even if it's contradictory to this thing called "reality" that the rest of us live in. I suppose the one thing College did give me is exposure to about twenty different genres of music, each of which I adapted on my own for at least a brief time.

Yes, it will probably shock you to know that, for a span of a couple months at the beginning of my Freshman year, I the former metal head turned bluesman, briefly dallied into the real of ... well, what was then called "alternative," but is now more like "goth" or "emo." Basically it was a crazy, experimental time. I think we discussed it in an earlier blog post, go look it up. Anyway, it forms a good chunk of this week's playlist. Close your eyes and picture the rest.

Wheel's on Fire -- Siouxie and the Banshees

What Have I Done to Deserve This -- Pet Shop Boys

We Close Our Eyes -- Oingo Boingo

People are Strange -- Echo and the Bunnymen

Something in my House -- Dead or Alive

Girlfriend in a Coma -- Smiths

Got something you think would go great on this playlist? Have you got a favorite playlist of your own? I'm always on the lookout for new music. Do share!