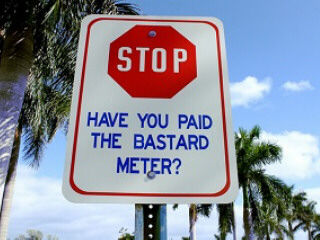 Okay, where was I?  Ah yes, I introduced you to "The Enforcers" yesterday -- the jack-booted elitists who patrol the sidewalks of Broad Ripple like fifth grade lunch room monitors looking for people who didn't drink their milk before heading straight for the peach cobbler.  I've had two run-in's with these guys.  The first time, I was reasonably amused, and it was my fault.  The second time, I am absolutely calling foul on the parking company, the Broad Ripple merchants association, and the Mayor of Indianapolis if I could get him to return my calls.

It's Tuesday.  I've parked my car and feed my hard-earned rent money into the meter machine before going about my business.  A couple of hours later, I decide to check the meter.  Of course, not the one by my car, that's a mile away (see yesterday's post).  I assumed you could go to any of these machines, enter your number in and put in more money, right?  Well, apparently not.  The meter I'm at clearly says that the time on my meter is expired.  Well, that can't be right, surely I've got at least an hour left.

So now I'm all paranoid that my car's been towed.  I make a beeline back to the other side of Broad Ripple to make sure the car is even still there (no point in paying more money on an empty spot, eh?), only to find out that, according to the meter next to my car, I've still got an hour left.  Okay, stupid and inconvenient, but at least it encourages exercise.  I put more money in the machine and max it out.  This will take me up to 8:50.  Probably not a big deal, I should be heading home long before then, besides parking is free after 9:00.

Now pay attention, because this is exactly where I went wrong last time.

8:45 rolls around.  I've met up with a new group of people and plan to hang around for a while.  As we're walking the avenue, one of my friends stops a lady hunting for change and reminds her, "Oh, don't worry, you've got enough there, it's free parking in fifteen minutes."  This is when it hits me:  I have exactly five minutes to get back to the other side of Broad Ripple and put twenty five cents in the meter to take me up to 9:00 when parking is free.  You may think this a stupid concept, except that I know from previous experience, The Enforcers have an app that tells them when your meter is about to expire.  These guys are more diabolical than the Phone Cops.  (By the way, how about making that app available to us civilians?  Maybe with an option to PayPal some dough into the meter from wherever we are?  I've got a Jukebox app that does THAT much, come on! Join the 1990's!)

Anyway, as you probably guessed, but hopefully didn't witness first hand, four minutes and forty five seconds later, I am in a foot-race with a parking enforcer, trying to beat him to my car.  Seriously.  Two fat asses in a wind sprint down Broad Ripple Avenue at ten minutes to 9:00 on a Tuesday night.

Worse, despite being larger than me, AND despite the fact that I technically reached and fed the meter before he reached my car and got his pen out, I still got a $20 ticket, for parking without paying for approximately 30 seconds.  $20!?  Really!?  Look, you've got my spot number, you've got my card number, can you not just bill an extra quarter to my card to cover the ten minutes?  Heck, bill an extra dollar to my card every fifteen minutes I don't show.  But, $20!?  The first ten hours I was parked in that spot didn't cost me $20, but that 30 seconds you were denied income somehow damaged your business to the tune of $20!?  Fuck you Broad Ripple!   I hope I catch that kid at an Indy In-Tune show someday soon.  I'll be all, Nope! You paid cover for the show.  You want an encore? That will be $20 bucks!