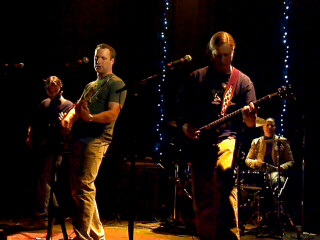 Video today form one of my favorite bands, VilaFishburn, playing PodConcert III a little over a year ago. These guys don't play out often enough, so I figured I'd share a little. The full audio of that set is available on our Mini-Concerts page. They first appeared back on Show #011, though it was recorded to be Show #009 and was, for some reason completely forgotten by me, held for over six months before I released it. I distinctly remember it was freezing when the show came out, but when we recorded, it was suffocatingly hot and humid as we camped out next to the railing at what is now Chumley's in Broad Ripple. VilaFishburn had just finished a set at the Rock Lobster's front stage -- yes, they used to feature live music in the front and the back. Crazy, I know. Honestly kids this town used to swing.