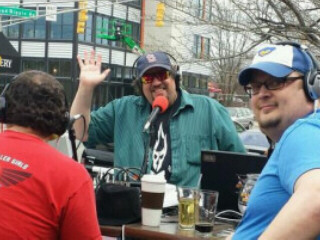 What can one say to so many great friends and supporters but ... Thank You!  And, one can probably not say it enough.  Radiothon 2014 has to rank as one of the most memorable and fun things that we've done since starting this overgrown hobby eight years ago this week.  As is always the case when we're doing live shows or broadcasts, the brain is usually going full speed keeping up with Tweets and Facebook posts, arranging guests, watching the audio stream, getting emails, queueing up the next track, hunting for some obscure trivia tidbit on the Internet, answering questions from passers-by as to what we're doing, etc.  Yesterday was the usual chaos times two.  I literally had people come up and tell me it was good talking to me yesterday, but I really don't remember them even being there -- rule of thumb:  If I'm not on mic, it means I've programmed just enough music to greet and thank the next artist on stage, hit the bathroom, buy a beer, collect the next radio guest, and sit back down.  If there's one thing I hate, it's time limits.  Drives me nuts.  Says a lot for how I could know everything about a subject in class, but would freeze up every time they'd had me a test and say "You have one hour."  Perfection?  Least favorite game as a kid.  The TV show 24?  Almost put me into a catatonic state at times.

Of course a full list of thanks for those who supported is pretty much impossible without going back through the recorded audio from yesterday, so let me just give links and props where they are due ...

Pres Maxson -- For engaging our enthusiasm, and letting us run with his idea for a short "radio plug for National High-Five Day." 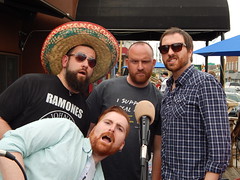 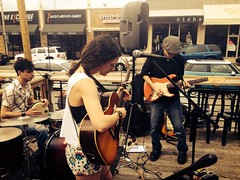 Brandon/Benjamin Cannon -- For managing the stage, herding the dust bunnies, and running sound ... effectively eliminating half of the stress from my day.


Irish -- For letting us auction him off and for just being the energetic little ginger garden gnome that we expect him to be.

Johnny Lyles -- For being the first to arrive, the last to leave, and for saying, "Tell me what ya need, bro," every fifteen minutes in between.

Jamie Jackson -- For being the local music scene, and supplying all of the toys we need to make shit work.

Dave, Kevin, Cory, and the staff of Sabbatical -- For letting us play in your yard, and not kicking us out when we get obnoxious.

Mark Kelley and Simon Saynor -- For setting the standard, providing inspiration, and reminding us that there's a world outside of I-465 ... which if Simon is any indication, is usually laying around naked in bed.  Seriously, it's RADIO, the visual was extraneous. 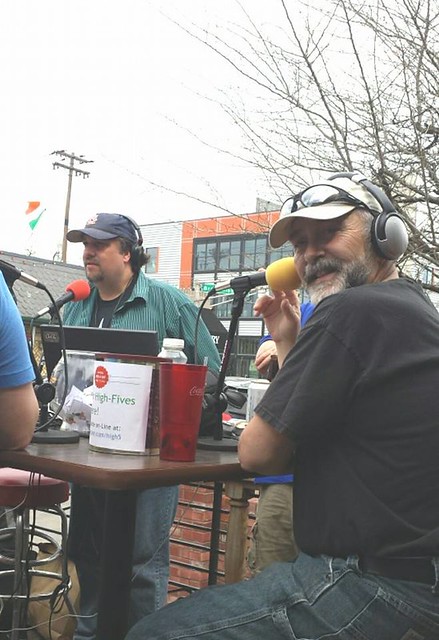 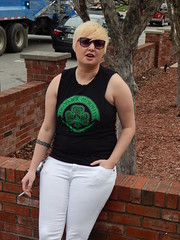 MP Cavalier and Scott Tollin -- For being the Beatles to my Rolling Stones, re-defining "friendly rivalry," and being brothers in the crusade to raise awareness and appreciation of both streaming radio and local music support. 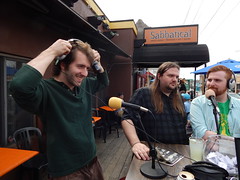 The best compliment cof the day I think came from Dave, owner of Sabbatical, who asked when we could do it again.  "There are lots of great charities out there. We can do this every week!"  I think there were enough lessons learned that we could do this even bigger, sure.  Next time though, 24 hours -- Saturday evening to Sunday evening ... and I'm thinking rooftop.