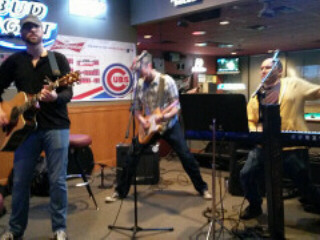 Yeah, sometimes even I get surprised. We've had 15 of these Monday Night Live shows now, and they've all been very different, as they were designed to be.  Much to the chagrin of the bar owners at the venues, and the equal confusion of music fans who just hate getting dragged out on the weeknights, Monday night live has always served two purposes: 1) Fill the void of silence on Monday nights, when no one seems interested in even going out, much less taking in a bit of the local music scene, and more importantly 2) Provide a ground for some minor experimentation to inject a little chaos into what would otherwise be "just another show."  I feel the later is justified because I know for a fact that normal Monday attendance at the bar in question amounts to about six hard-core regulars, and the bands and I don't "technically" get paid for these shows.  It's really a win-win for any bar owner who cares to sign on.  I've had some weeks where the venue has been forced to break open a new case of glasses because every one of them is full of beer and out on the floor (Whoa!Tiger/Shadyside Allstars) and some weeks where the band was playing to their girlfriends and me (still double the business on a normal Monday night).  I've pitted players together just because I wanted them to meet (Jenn Cristy/Grinning Man), I've pulled in rock bands and made them go acoustic (Dell Zell/Minute Details), and I've made rounds out of my favorite, players that are either unknown or not well-known enough (Dave Vogt/Danielle Clashman/Marvin Parrish).

The premise of last night's show, which I made no secret about, was three very different musicians whom I think of as three of the funniest guys I know.  Chris Burch being a sarcastic, abrasively funny individual; Pres Maxon, a goofy fun guy; and Jeff DeHerdt an intellecutal, self-deprecating wit.  The music, I thought, would be a challenge to integrate (I essentially put Tom Petty, Ben Folds, and Donald Fagen on stage together), but the banter was certain to be legendary. I was not disappointed by either.  The quips started during soundcheck, and by the second run through of the round, and my request for a quick picture for the Facebook page was met with exchanged looks and a and simultaneous pose-striking, the perfect timing of which was actually funnier than the resulting picture.

Musical collaborations were forming with Pres taking an electric guitar solo in the middle of a jazzy DeHerdt number, with Chris singing a comical falsetto backup over the top.  Anybody walking in and though this was an organized band, would no doubt be unimpressed with the spectacle (two guitars and a keyboard that were just playing and singing seeminginly random lyrics!?), but anyone familiar with the local scene, and these three guys in particular, knew this was improvisational gold.  Okay, so it wasn't a stellar night for these guys as musicians, and I'm sure there is a bounty on my head if I ever trash their respectable careers and make the recordings available.  From where I was sitting though, this was what Monday Night Live was all about:  Stir things up once in a while, create new pairings and strange situations, and just have riding-a-moped/screwing-the-fat-guy fun with it for a couple of hours.  Local music doesn't have to be the same dozen bands playing the same dozen songs. Last night, as well as Friday's JamTron show, proves there are still freshness and fun to be had in the local music scene, you just have to bring it out yourself sometimes.